Hello, I always like to say at the beginning of these that I have remembered everything to the best of my ability but I may get the odd bits wrong.

On Saturday I ventured over to Low Moor in Bradford for True Grit Wrestling at Low Moor Club. My last trek to True Grit was from Leeds to York and it turns out, given Low Moors position in Bradford, it was easier to get to the York show. But after getting a bus from Leeds and getting off at Odsal (home of the Bradford Bulls) I went into a cosy little pub called Top house. They were showing a Rugby match and had 4 or 5 ales on handpull. I had a pint of not from Yorkshire anymore Tetley’s which was passable. I then had a wander round to Low Moor Club which took about 15 mins but I am sure Google maps sent me a weird way, I went down one particularly dark lane…….I ran. 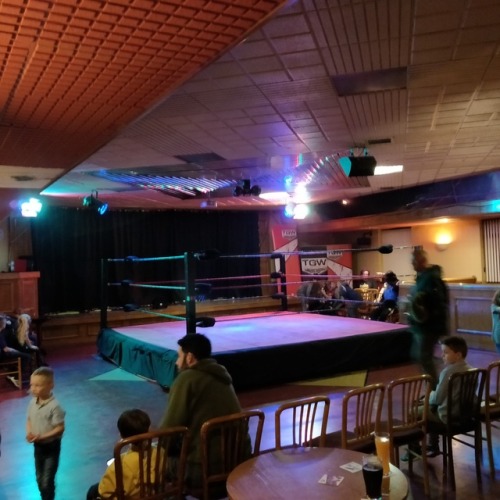 I went into the venue and the main Members only bar was downstairs and the wrestling was up. Doors were not for half hour so I had a pint of San Miguel at £2.90. I have to be honest, and it could of had a slight effect of my enjoyment of the show but I was feeling slightly under the weather and did pop to Tesco next door to get some medicinal aids.

At around 6:15pm I ventured upstairs with Matthew Doherty (@leeds_warrior85) and he got us some seats alongside Dan Griffin (dangriffin21) who I had most recently enjoyed a drink with at the previous weeks Southside and Progress shows. I went to the bar and whilst in the queue got told a totally absurd and non wrestling related story that really was out of place at a family friendly wrestling show but…………..some people.

There was a good crowd in the venue with lots of children which is good to see as they are future fans. The venue was very similar to most working men’s clubs I have been in in the North of England and you could imagine wrestling being held here 3 or 4 decades ago and it would have looked very similar.  We sat down (as was everyone although I will admit I much prefer standing but the set up called for sitting) and awaited the introductions from local Leeds lad David Graves who is still out injured and sorely missed on the local scene. expecting a big 2019 from the man.

This was a good start to the show with 4 guys we see regularly around Yorkshire and who have probably wrestled each other in some fashion numerous times. Only began with a promo on how they were going to win back THEIR tag team titles and called everyone scumbags which drew lots of boos. Only is a really good promo.

This was a really solid tag team match with Nsereko taking most of the match and Only and BA using some good tag team wrestling but also Only distracting the ref on more than one occasion to allow BA to attack and cheat without the ref seeing. simple but effective. A hot tag to Strife who brings fire and some close calls.

The Lion Kings got the pin much to the delight of the crowd and after a small celebration Sebb and Nsereko hotfooted it straight down the stairs and off to their other booking.

Probably my favourite match of the night and you always expect a good showing from Bandicoot who has become so reliable to provide a good performance. This was the 2nd time I had seen Joe wade who has the same high flying abilities as Bandicoot although quite a lot taller and I expect him to be getting booked more often next year.

This match started off fast with lots of reversals and trying to out do each other with their abilities. One gripe from me is I felt the ropes were too loose all night and it showed a couple of times in this match particularly when Joe Wade went for a springboard back off the ropes and turned it into a sort of bicycle kick. Wade didn’t seem to get the height but he wasn’t helped with any spring on the ropes. This was a match with great moves and some great facials from Bandicoot who was over with the fans here.

The match finished with a splash from the top from Bandicoot and the 1,2,3 from the ref who had the slowest 3 count I have seen. He was not slow for any reason he just had a naturally slow count and in more than one match it was noticeable.

A good match from 2 young, athletic and talented wrestlers with big futures ahead if they want.

I am not going to say a lot about this match. It took a fair few minutes to get going, Pop punk kid can’t do rolls (he can because he has had some really good matches in other promotions) there was ring a ring of roses, then after 5 or 6 minutes there was some wrestling. Pop punk kid won after Rolls hit a knee on Nash but Pop punk kid threw Rolls immediately out of the ring and got the pin.

The best thing by far in this match was the Pop punk kid Jake Silver and his whiny bitch character. And for anyone who knows, all pop punk songs are sung by white boys who think their pissy problems are the worst issues in the world and Jake Silver conveyed this brilliantly. 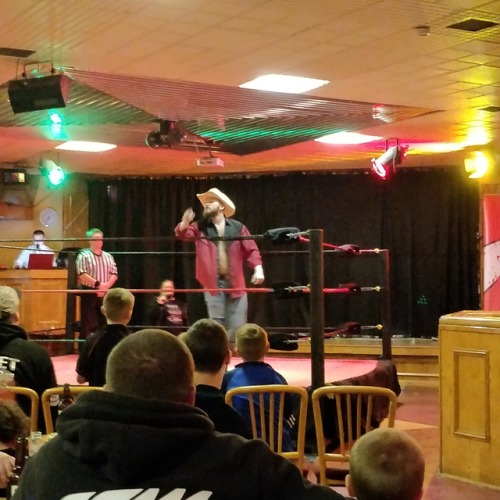 This was more like it. Boris came out to a big pop – everyone loves Boris. He didn’t bring out his usual bottle of Vodka which is probably best at a family friendly show. I see Cowboy John a lot as a referee and I have seen him in a match once but as a replacement and in his ref gear. This was the first time as ‘the Cowboy’ and he put on a good show and had a fair share in a real 50/50 match. Early on Boris got attacked at the knee and this was a target for the Cowboy who at one point, of course, put on the Texas Cloeverleaf. HE’S A COWBOY! After a nice match with possible near falls and tap outs either way Boris got the pin with another slow count (cowboy John would not have counted so slow) for the victory and sent the crowd into the interval very happy. It was very good to see Cowboy John wrestle.

INTERVAL – I had another pint of San Miguel and there was a raffle which I did not win. 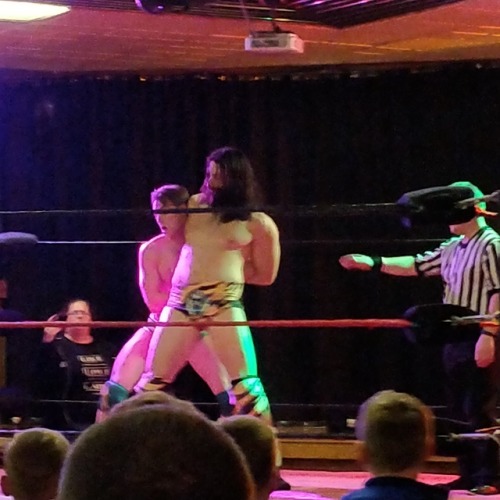 Dom Black is a big crowd favourite with the True Grit faithful and this was his 2nd shot at the title after a brilliant performance a few months previous at Fibbers in York. It was also Dom’s 25th Birthday so happy birthday wishes were in order.  This was not the Pork of York of other promotions that may target more of an adult audience so Dom did have to reign it in a bit especially around the entrance.

This match started off with a lot of Dom trying to get the better of Saxon Huxley with his speed but Musclecat controlling with his upper strength advantage. This was a good technical wrestling match which then spilled out into the crowd with Dom diving from the bar with a very low roof onto Musclecat. He couldn’t stand up straight on the bar and didn’t seem to be able to rotate fully and looked like he hurt himself which he confirmed after showing me the mark the bump left. Luckily, nothing to serious.

There was a very close roll up from Dom that had many thinking he had the win but in the end after a crazy looking throw and more than one finisher Musclecat took the win. good solid match and when Dom finally gets the win (probably in York) there will be a big pop for the local hero. 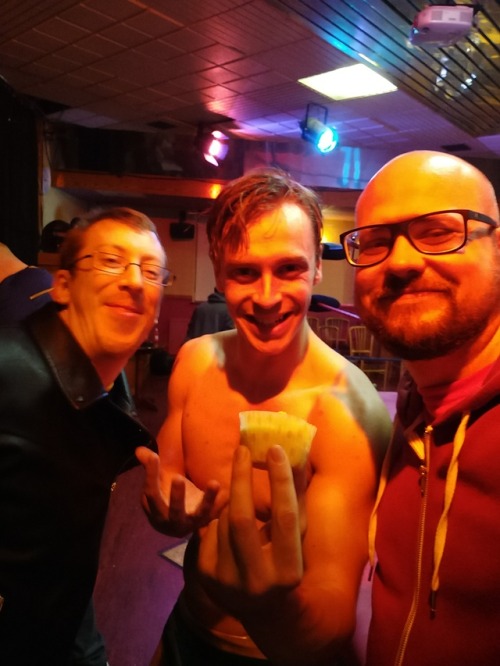 Very quickly Bandicoot did a “KOFI” and when BA went to push Jack of the ring apron to the floor he jumped across to the banister near the stairs and kept his feet off.

Pop punk kid who had been hiding and forgotten about then came in and won the rumble much to everyone’s chagrin. Whilst celebrating Graves announced an 11TH entrant into the rumble and it was the winner of the last Rumble SEBB STRIFE!

Sebb came in from the stairs he had left down earlier and very quckly eliminated Pop Punk Kid to win his 2nd rumble in a row.

After this the Pop Punk kid took a finisher or move off all the faces and was left lying to finish the show.

Looking back on this show their was better wrestling than I remembered and do think feeling under the weather had an effect on that. The kids at the show loved it which is exactly what the show was about. Due to where the venue was I will do a True Grit again but probably the York shows. A great nights entertainment for the young ones and some really good wrestling for everyone.