Hello and welcome everyone to another edition of Graps and Claps this time taking me to Leeds once again for a double dose of Tidal Wrestling with the first show being a first time ever type show over here in ‘Grounded’ which was an all no-rope card of all things, so it was to be expected that many wrestlers would be trying to avoid teetering off the edge of the ring.

Not much to report from before the show as I took my journey to Leeds on a 3 hour rail replacement bus service which at one stage ended up going down a dead end on a residential street – this day could only get better! I did though get chance to visit one pub called The Hop which is overseen by Ossett Brewery located at the back way to the entrance to Leeds Station.

On first inspection this was a tidy joint with about 10/15 beers on tap and a good sized seating area, this place also does pizzas and gourmet pies if you are ever visiting and I for one will try to make a return visit in the coming months. So with that said let’s get into the wrestling action on what was a packed day of grappling.

The first show as stated was ‘Grounded’ in front of what was a small but supportive crowd for this interesting concept. First match of the afternoon was supposed to be Jake Silver of Crashboat taking on Brady Phillips but Brady was caught in traffic, so with that said Silver had to find an opponent and after not much deliberation with Colin up top, it was decided that Jake would face his Crashboat team mate Jack Bandicoot. 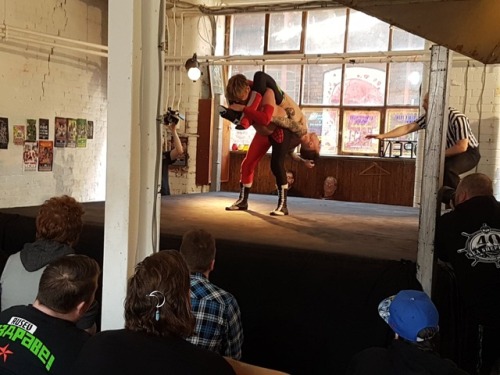 A very good opening to proceedings here with Bandicoot making great use of girders and posts near the ring to latch onto to try and avoid falling out of the ring. Even with no ropes Bandicoot managed to climb to the top of one post and did a big splash to his mate down below to get a 2 count. To add insult to injury for Silver, Bandicoot climbed on top of his back to hit a great ddt to get the 3 count – Jack was excellent here folks, keep a look out for him in the future! 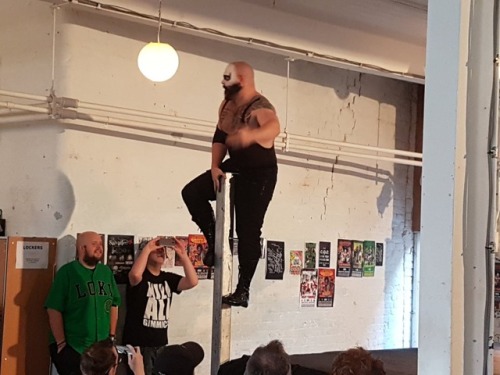 Second match was a switch up from the last match with two big hosses going toe to toe with Henry T.Grodd of Futureshock fame taking on one half of the tag team champions – Sebb Strife. Lots of visual points here regards Grodd having a resemblence to League of Gentleman character – Papa Lazarou and also by the end of the match his facepaint looked like a well sucked bubblegum ball – wow just wow!

Early part of this match was both guys jockying for position trying to not fall out of the ring, but that didn’t last long as Grodd charged at Sebb to spear him to the floor to the gasps of the crowd to wound the Lion King.

With Sebb’s back injured he was then rammed into the exposed turnbuckles to reinjure Sebb even more. With Grodd on top he was looking for the killer blow but he went to charge at Sebb once again, but he missed connecting with the post only for him to be rolled up by Sebb for the 3 count.

Third up was supposed to be H.T Drake taking on El Ligero but Ligero fell foul of shitplanes.com and was delayed getting to the venue (he would eventually turn up in the evening show). So they had to find H.T an opponent and they did in the form of latecomer to the venue and your Tidal Open Champion Brady Phillips who carried on with the tradition of him wearing shit pants – these pants were certainly from the ‘Rupert The Bear’ collection, look at these rascals! 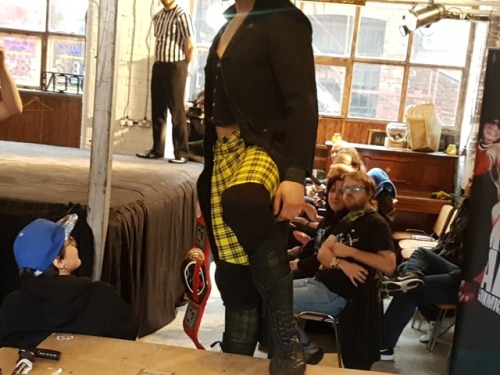 Brady may have shit pants but you can’t take away his wrestling ability of which he is a fine wrestler and someone who 2019 he could shoot off into the wrestling stratusphere. 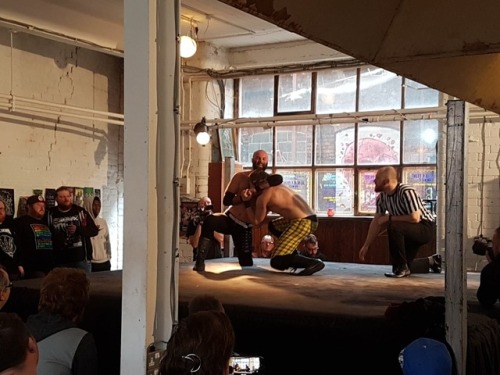 The match opened up with a collar and elbow tie up pacing around the ring and returned back to the ring with both Brady and H.T hitting Steamboat-esque arm drags to the rightful applause of the crowd. Back on the outside though, Brady went to chop Drake but missed by a mile and was left with a throbbing hand the like you haven’t seen before (this made an excellent sound) Brady however despite that setback soon got the upper hand by irish whipping Drake into the exposed post and landing into pool table – christ this hurt as you can see below. 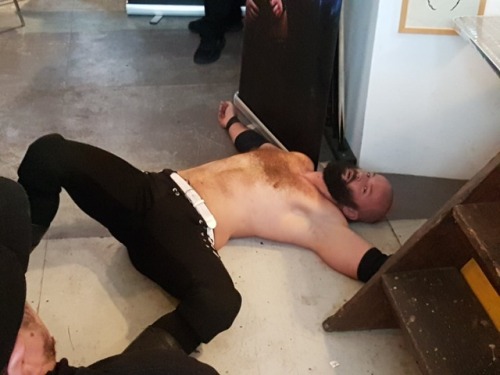 Drake however recovered and he looked on his way to victory by hitting a step up codebreaker to Brady for a two count, but as he went to finish it, Brady grabbed his Openweight title and belted Drake around the head to cause the DQ much to the apathy of everyone in attendance.

Apart from the result, this is certainly you should check out – Brady certainly has the potential of being a shit eating heel but he can also back it up with putting on great matches month in month out in Tidal.

Half time now and the disappointing news that the famous Vegan Curry was not on sale and was instead replaced by £5 gourmet vegan hot dogs with nachos. These filled a hole but nowhere near the quality of the curry and maybe not one to try if you are visiting, I did though receive good reviews of the Vegan Chicken Burger. 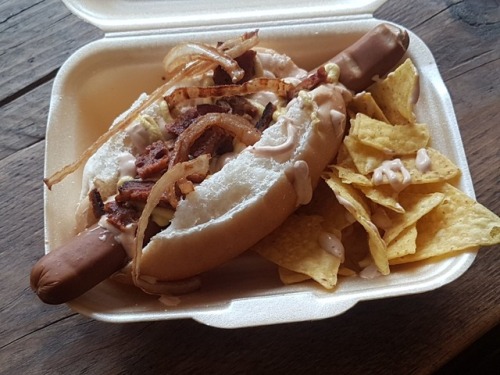 Back from half time and we returned with Sean Only who is still finding his feet as a good guy in Tidal, having seen Sean as a baddie for so long I cant help but think that some shithousery is around the corner. Only’s opponent for this afternoon was Nsereko who was looking all ready for a grapple and so it did as it got off to a pleasant start bit soon the pleasantries were over as both Nsereko and Only hit leg strikes to mark each other.

Nsereko at one point got too much distance on a flying headbutt as he nearly fell out of the ring but thankfully he didn’t fall to his impending death on the floor. Nsereko hit another flying headbutt but only got a two count which was as good as it got as Only finished off the Ugandan Warrior with a curb stomp for the 3 count.

Second to last match was the contest more fitting to the MMA style ring set up with both Dan Evans and ‘Serious’ Kevin Lloyd being well versed in the fine grappling arts.

This was so different to all the other matches as they never left a circular section of the ring using an array of takedowns and wear down holds. Despite Kev being the supposed favourite in this match, Evans very much held his own here as he hit a spear and Death Valley Driver for a 2 count and then finished a valiant Kev off with a Pumphandle Slam variation to get the victory.

Evans has certainly improved tons in the last 6 months and has gained two big victories against Koslov and Kev in recent months. Kev on his first appearance for Tidal impressed and hopefully this isn’t the last time we will see him in the Leeds venue.

Now time for your Main Event which was a battle of best friends in real life with Chakara taking on Candyfloss in a continuation from a match that they had at the all women’s show a couple of months ago where Chakara picked up the win on that occasion.

Great matwork in the opening part of this contest with both looking excellent in the process, I do have to say for someone as young as Chakara is, she has a great ring presence which maybe hasn’t had the opportunity to shine in your likes of Progress where has been featured prominently as one of Jinny’s lackeys in The House of Couture.

After a lengthy time on the mat, at a standing position Candyfloss started work on Chakara’s arm twisting and turning it and even stomping twice on Chakara’s already twisted arm. Chakara did make a comeback and locked in a Camel Clutch to have Candyfloss writhing in pain but she managed to escape her clutches. 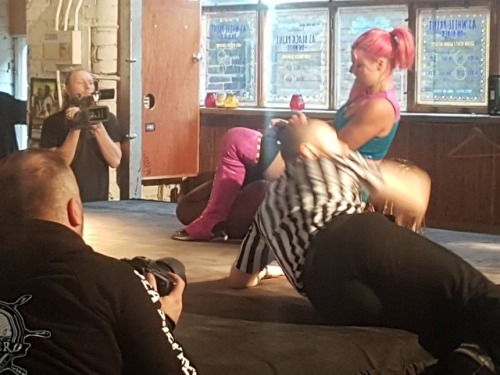 Floss went back to work on Chakara’s arm as she locked in the Candy Cane arm submission to get the tapout victory to end an excellent match and to end a really good concept show that got the thumbs of approval from those in attendance.

So with that said, I hope you have enjoyed this review and if you want to check out Tidal in the future they have a show on November 18th and there final show of the year is on the 16th December with an appearance by The Great O-Kharn.

Next time you will hear from me it will be with a review of GPW in Hindley taking place on the 26th October, so until then – BYE!!

Editor’s Note: Unfortunately there won’t be a review of the evening show due to me not being able to take notes due to my battery dying on my phone and also substitute note taker (our Geoff) also with his phone on charge.

I did miss the last match and a half due to talking to Sebb Strife outside who as always is a great guy to speak to talking about his knee injury and other wrestling stuff.

What I can report was that there were a couple of belting matches on this card with the aforementioned Brady Phillips besting Ryan Hunter in an excellent opener which provoked chants of ‘Please Come Back” for Hunter and also an array of Songs for Brady with the premise being all songs with the word ‘Baby’ in but replaced with Brady – christ almighty this was filled with classics.

We also had the return of Rampage Brown to Tidal after a shoulder injury, he certainly returned to a hero’s welcome here as he dropped a gallant TK Cooper in just under 15 minutes with a Piledriver – so great to see the big man back in action.