Hello and welcome back to the Fantabulous Adventures of #GrimsbyGraps.

Friday March 1st saw British Wrestling Revolution’s return to Cleethorpes Memorial Hall for No Gods No Masters 2. It’s already been a year since BWR’s debut here – a genuinely impressive show in which they booked WWE UK champion Pete Dunne and Jimmy Havoc in the middle of a snowstorm. It was the start of the company’s ascension into Championship-level graps. You’ve heard me wax lyrical enough over BWR in other articles, but the Lincolnshire scene is so strong right now. For those of you who love calendars as much as teenage girls love BTS (Google it), you’ll notice this is the fourth show in the Grimsby area since January 15th. One every 11 days. It’s as though I became ruler of the world and issued a decree of ‘MOAR GRAPS’ under penalty of death.

No Gods No Masters 2 comes at a transitional time for British wrestling. NXT UK has put the careers of a few dozen people into a purgatorial state (think of the warehouse in Enfield like the island in Lost), while All Elite Wrestling is whooshing around what’s left (like the Black Smoke Monster in… why the Lost references ffs?). So ring announcer Richard Young’s call that the card would be “the best in the 20 years I’ve done shows in the area” was slightly Schiavone-esque, but it’s exciting to see who will emerge as the next generation of talent.

Some bullshit at the beginning as Joe Nelson versus Tom Weaver (w/ Blake & ARGH NO MUM I WON’T TIDY MY ROOM music) barely lasted 90 seconds before Blake induced a DQ by pulling the referee out of the ring. As someone who hated how Teddy Long’s PLAYA PLAYA tag matches looked on paper when I spent hours scrolling through old results on Obsessed with Wrestling, I’m not counting this as a match. They beat Nelson down until #GrimsbyGraps Hall of Famer Joseph Conners made the save. If I say “Joseph Conners got a loud as fuck pop”, the dear readers of The Indy Corner will think I’m taking the piss. But, no, really, his pop was loud as fuck. Conners is not the workrate connoisseur’s choice, but he’s impeccable at engaging certain crowds (see also S***hs**e and NGW). It explains why NXT UK continues to push him… in a half-arsed ‘make up your income by wrestling elsewhere’ kind of way. 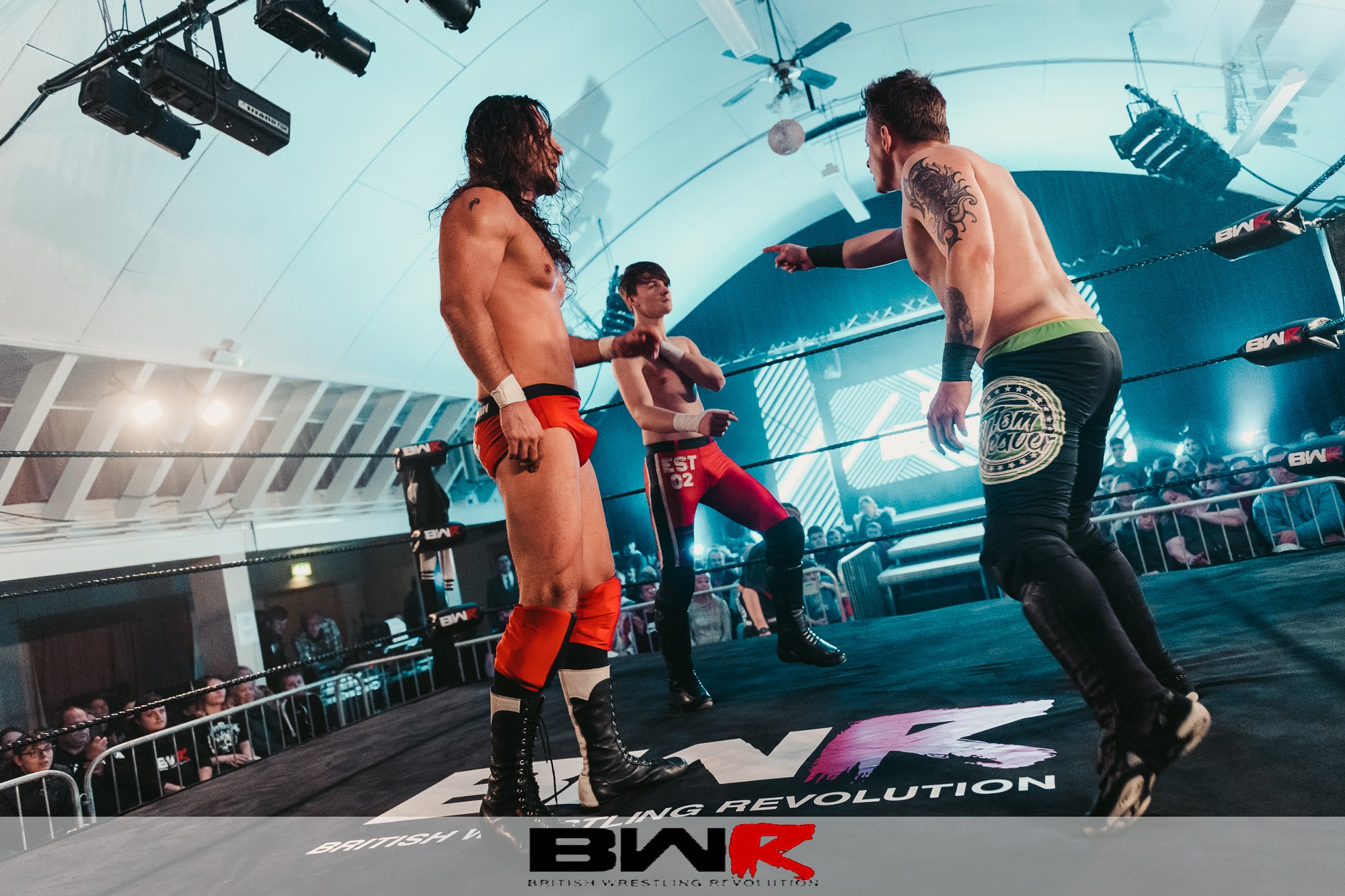 Anyway, the actual opening contest pitted Tom Weaver and Blake against the two Joes: Conners and Nelson. Conners dominated the start, only coming undone when he tried to relive his days as a Progress Atlas contender by challenging Blake to a shoulder barging contest. Soon the baddies isolated Nelson with a massive sideslam from Blake and a side of Weaver’s chops. Blake has been watching his New Japan tapes as he threw Nelson over the guardrail into the crowd in hope of a count-out victory. However, our boy wonder made it back at nine thanks to Conners rallying the crowd behind him. Conners tagged in and delivered an atomic drop, clothesline and scoop slam on Weaver. Conners chucked Blake and Weaver outside, and in came Nelson who delivered a moonsault. A quick skirmish thereafter saw Conners drag Blake off the apron just as Nelson CHEEKILY ROLLED-UP Weaver for the three-count.

Next, the last quarter-final in the Women’s Title tournament featured two debuts as Session Moth Martina faced Kanji (a last-minute replacement for Saraya Knight… that’s five shows in a row I’ve been to where a Knight has pulled out). In front of a new crowd, Martina did her classic drunk shtick – hey if it works, it works! After five minutes of Martina learning how to wrestle, she and Kanji had a blistering seven minutes of power moves and hitting the ever-loving shite out of each other. I feel it was slightly under-appreciated by the crowd as they went through their repertoire of suplexes and headbutts and brawling on the outside. Martina ultimately won out, booting Kanji away to give enough space for second rope Codebreaker. Good stuff. If BWR did video-on-demand, I’d recommend this one. 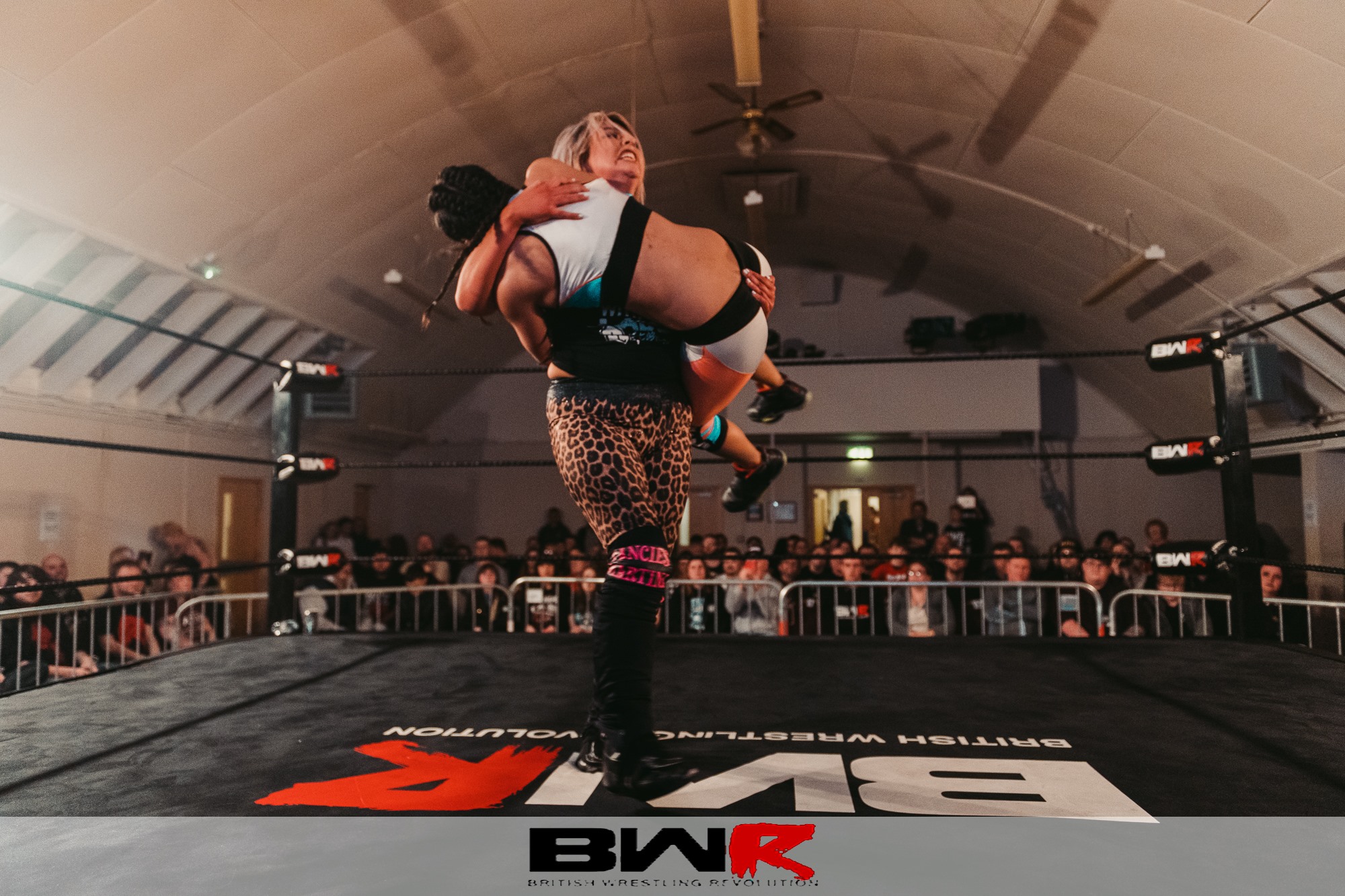 Martina’s celebration was cut short by Chief Deputy Dunne and the first appearance of Los Federalas Super Santos Jr. Apparently Cleethorpes is having too much FUN-AAAHHH. Doubt it, mate. Have you lived here? The new team of Scotty Rawk and Chuck Wood – known as Who Scott Wood (read it aloud) – appeared to kick off the second impromptu tag match of the evening. Things seemed friendly at first between Wood and Santos until Wood grabbed his axe, which caused Santos to pull out his quadruple-barrelled automatic laser shotgun (he’d accidentally left the cloaking device on). The standoff ended without fatalities and the match continued. It was a tidy contest – Rawk was let down by the ring ropes being slack but recovered his armdrag nicely. A hot finish saw Rawk nail the springing tornado DDT on Dunne, but Santos prevented the 450 Splash. Wood clotheslined Santos over the top rope and, curiously (as it didn’t scream ‘storyline’ to me), kicked Dunne in the nads and got our second CHEEKY ROLL-UP of the evening.

The World #GrimsbyGraps Championship found itself in the first half main event position again. ‘The Big Kink’ Jack Jester defended against former champ Jimmy Havoc in a No Disqualification match. You already know what you’re getting. There were some amusing moments, such as the poor girl who had Havoc then Jester nick her beer, and the barbed wire 2×4 almost wiping out two children at ringside. But: ladder, chair, DVD onto chairs, ringside brawling, crowd barrier, more chairs, the aforementioned barbed wire stick, etc. Jester tombstoned Havoc into a chair to retain. 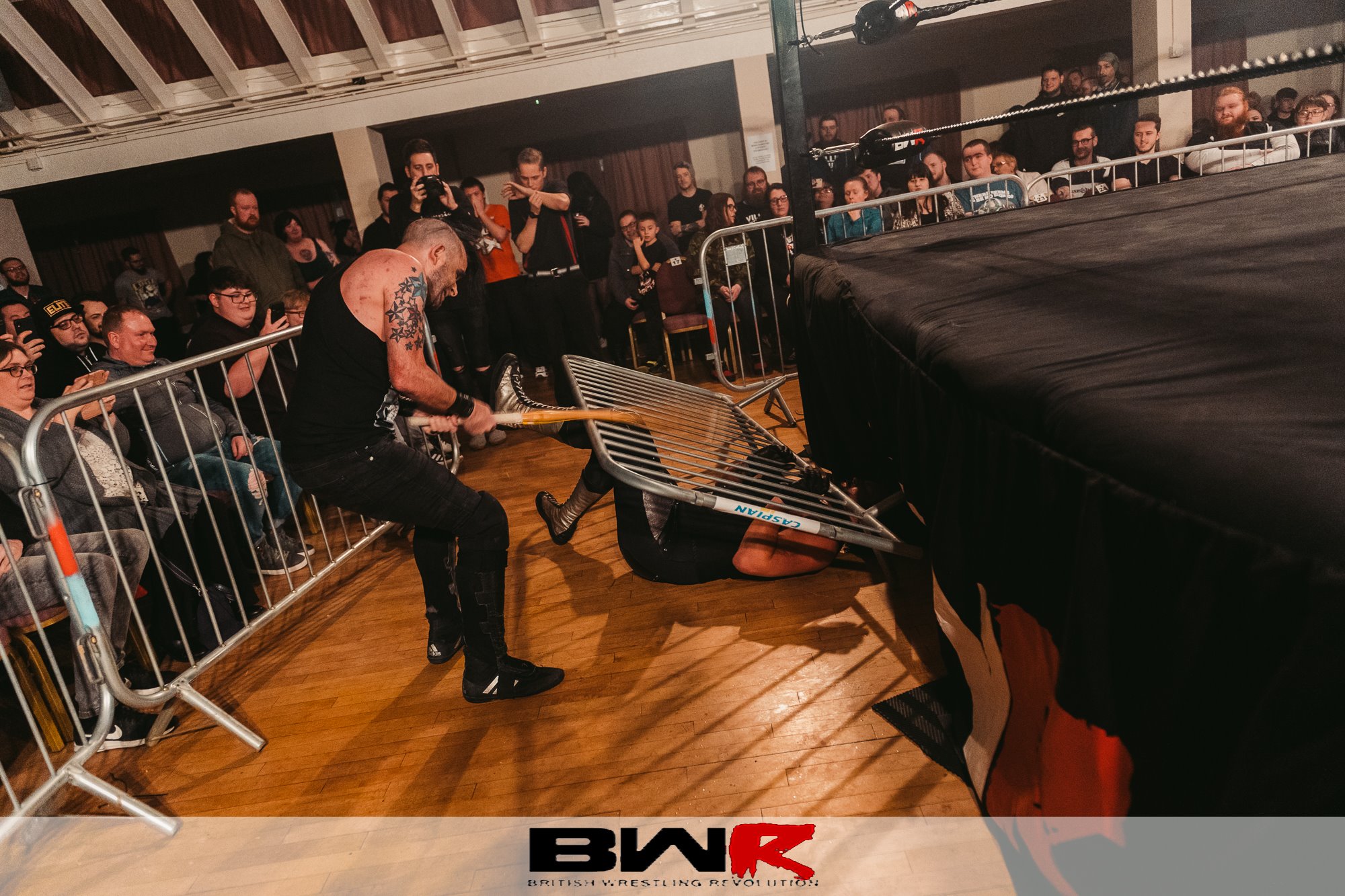 After the match, AEW-bound Jimmy Havoc gave a farewell speech. It’s a shame to see him go as his contribution in putting BWR on the map, not to mention Britwres as a whole, has been immense. Saying that, watching a Jimmy Havoc match hasn’t been the same since Death House took the hardcore gimmick to its extreme. BWR is also selling itself short – a Heavyweight title shouldn’t be fought by lads throwing around pots and pans like it’s 1999.

One intermission later, Will Kroos entered unfamiliar territory as a good guy aiming to defeat Joe Hendry fair and square. A slow-burn start included swapping headlocks and some of the biggest barges outside of The Barge. A tussle outside the ring was clean enough – Kroos opted for a legitimate Hardest Part of the Ring slam than anything too nefarious. Inside, they traded holds and rolled about again. The sequences would’ve looked odd if Joe Hendry wasn’t a big man himself, but worked well in establishing Kroos’ credentials. Will introduced power moves such as a neckbreaker and spinebuster. His undoing though was an attempt at the moonsault he hit perfectly at last month’s show, missing by miles this time. Hendry scooped up Kroos and planted the Fallaway Slam on the big man for the three count. They shook hands to end the short but sweet match. 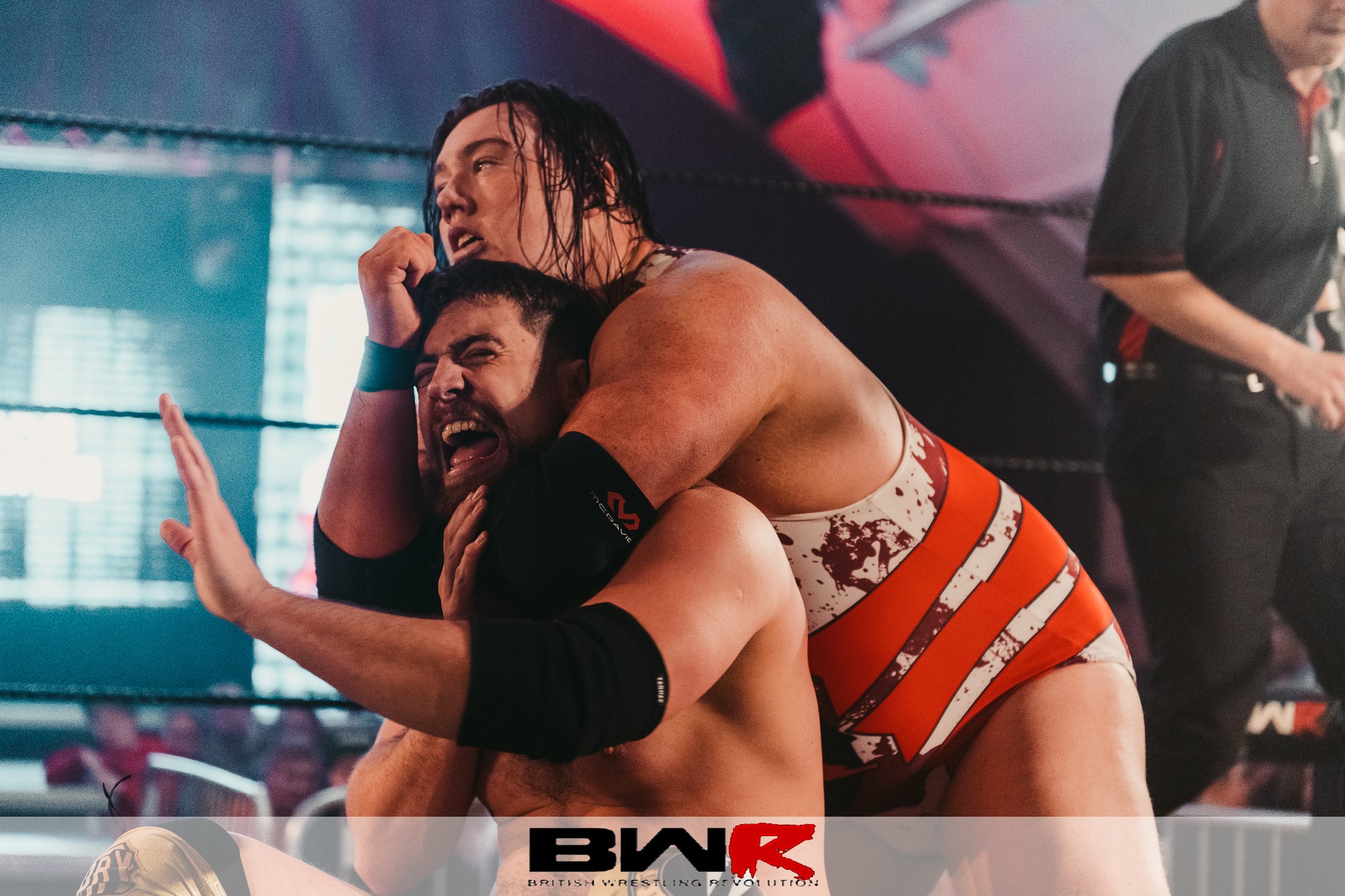 Next, The Sick Boys (Rory Coyle & Erin Jacobs) defended the BWR Tag Team championships against Grado and his quote-unquote cousin Jimmy Mcilwee. A mishap led to something great – ‘Like A Virgin’ cut out mid-chorus, so the crowd took over the reins. It has to be said BWR crowds sometime seem afraid to let loose, and this was an excellent icebreaker as a pocket of fans even felt encouraged to try Ogden-esque chants later. The match itself pitted BWR’s darkest characters against their most comedic, and the clash threatened to derail Sick Boys’ mystique as they fell for Butlins-style comedy. Grado’s shtick is amusing though – distracting his opponents by pointing to the crowd and yelling “STEVE!!!” made me chuckle. The Sick Boys escaped on the night when Coyle blasted Mcilwee with one of the Tag Titles and hit the White Noise for the three count. Cue a post-match re-do of ‘Like A Virgin’.

The main event pitted former friends Kip Sabian and Robbie X in a contest for BWR’s Cruiserweight Championship. During Sabian’s 310+ day reign, he has taken the belt from a curio concept circa 1997 to BWR’s most prestigious title. He had dodged Robbie X’s momentum twice in triple-threat matches along the way. Sabian and Robbie started with a short feeling out process before going balls-out through an impressive sequence of jumps and dodges. Some groundwork later, they went outside the ring where things got heated. Sabian parted the fans like Moses and threw Robbie X into row five of the unforgiving banquet chairs. Then he wiped his sweat all over a lady’s jacket (she looked pissed off afterwards, must be dry clean only). Sabian attempted the same again on the adjacent row, but Robbie X flipped off the wall onto Kip in a one-take Hollywood action films dream of. Inside, Robbie tried the X-Clamation and was booted in the face. Kip couldn’t wear him down though and, after Robbie hit a boot in response to Sabian’s penalty kick, spat in Robbie’s face. Robbie’s cool temper meant the psychological edge stayed in his favour. Sabian had no answer other than to use his Kip Driver for the two count. And then, out of nowhere, Robbie executed the X-Clamation springboard into RKO manoeuvre to win the BWR Cruiserweight Championship! An excellent, epic encounter to cap off Sabian’s impeccable reign. 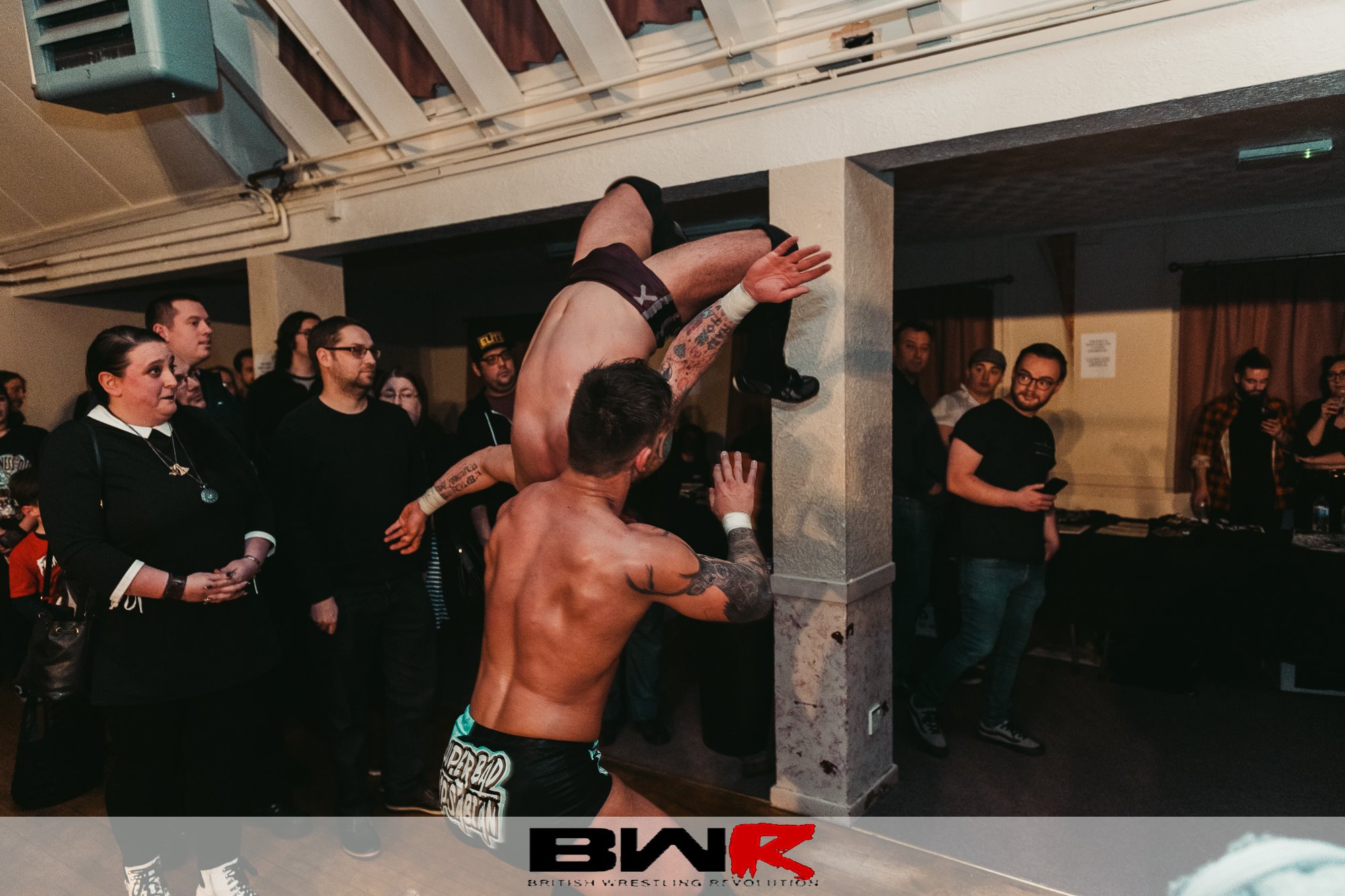 The show ended with Kip Sabian on the microphone giving his OOC farewell speech. All Elite Wrestling’s signing of him is inspired. He has the looks, moves, charisma and promo ability, and yet only Rev Pro out of the Premier League Graps ever gave him a look-in. A massive congratulations to him – I’m sure he will stand out in America.

BWR No Gods No Masters 2 was a highly enjoyable card. I wouldn’t say it reached the levels of last year’s show, but it was a nice glimpse of what’s coming while closing chapters in their main title divisions. I have no idea where BWR goes from here, apart from Reese Ryan holding a raging shindig to celebrate his Underground Championship win on April 5th, but I am excited to find out.

If you like what you’ve seen, follow me on Twitter @KidSWOL. Just don’t expect any #OnBrand shitposting from me for a while as I’m physically and mentally exhausted. I’m sure a holiday to Germany that involves 6 shows and a bowling tournament in a 48-hour span will perk me right up. Right?