If you missed my article recapping British Wrestling Revolution (BWR) since October, I recommend you check it out. It explains everything that has happened in the last six months, including why Friday night’s show at Lucarly’s was called King of the Underground Redux. Spoiler: there was another King of the Underground that didn’t go according to plan.

Instead of repeating myself, let’s get straight into the action.

The opening contest saw Scotty Rawk try to exact revenge on The Sick Boys’ Erin Jacobs. Inevitably, though, when you’re facing a man twice your size whose face is covered in blood, your movements in the match will resemble a pinball. Jacobs battered the hell out of Rawk. Any glimmers of a comeback were quickly dispelled – Rawk tried a jumping hurricanrana and ate a vicious powerbomb. Jacobs grew sick of the rules as he reached for the pink chair he crushed Cole Quinzel’s neck with last month. He wrapped it around Rawk’s neck, but was prevented from causing serious harm when Jimmy McIlwee made the save. A chair-aided dropkick sent Jacobs to ringside as announcer Richard Young declared the match a no contest. 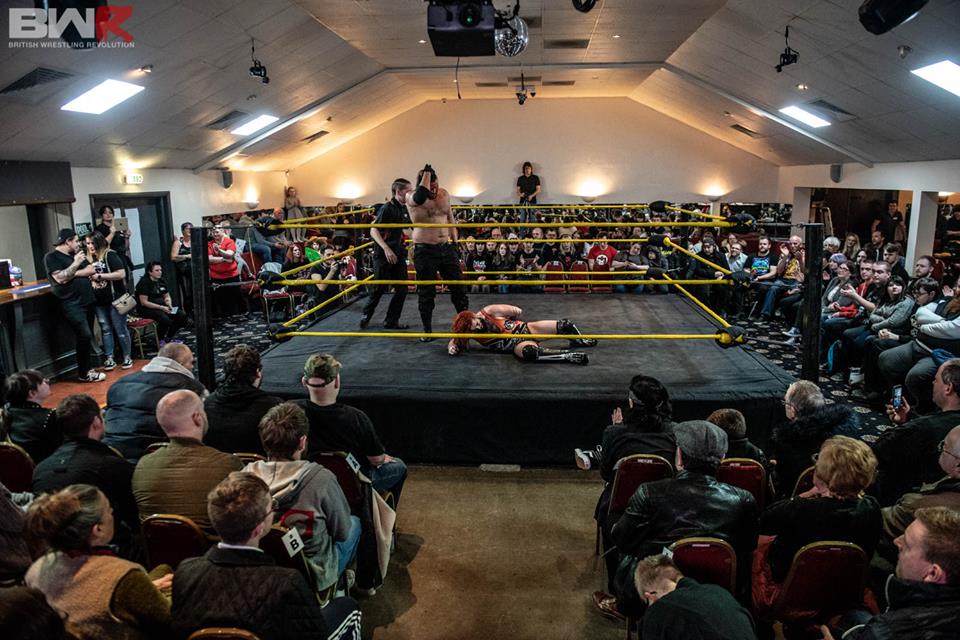 Up next, Joe Nelson (returning to BWR after a cameo at April’s Dive and Kicking) faced the debuting Brady Phillips. This match should be familiar to those who attend TIDAL in Leeds or S*uths**e in Sheffield, but here in front of a new crowd, they tore the house down. Brady (and his Rupert the Bear pants) was outclassed by Nelson’s sheer speed at the beginning. He shifted the momentum back in his favour through some nasty uppercuts, one of which saw Joe land on his neck (ouch!). Nelson had five finishers stored in the Smackdown vs Raw in his mind, trying repeatedly for the Sliced Bread #2, but Phillips turned out to be the master of pressing R2. Brady took control, applying a Figure Four Leglock that, despite its reversal, caused significant damage. Problem was, he tried to play Nelson at his own game with a spectacularly missed Cannonball. Nelson landed a twisting DDT and Attitude Adjustment out of nowhere. He then went to the top rope, but Brady responded by leaping up and superplexing him – an incredible manoeuvre that rendered a two count. Phillips resorted to grabbing a banquet chair from ringside, which distracted him enough to fall for a superkick and the Sliced Bread. Nelson picked up the pinfall victory. 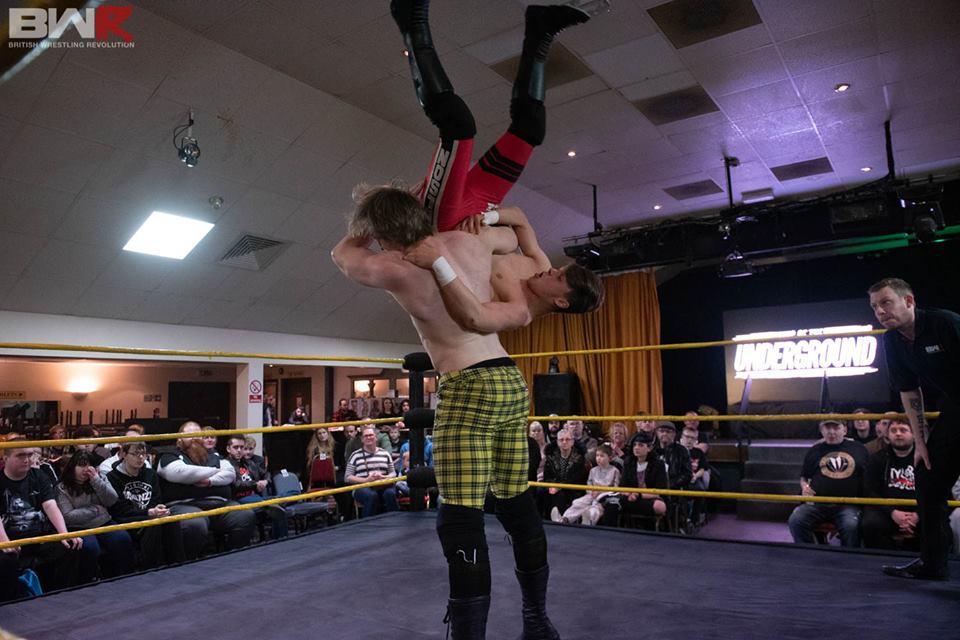 Brady Phillips offered his hand afterwards. Nelson saw right through the swerve and sent Brady packing. A captivating contest, and proof why every promotion should book and invest in both individuals. The only downside to this: Joe Nelson was probably born after Brazil last won the World Cup so he makes me feel old as fuck.

Reese Ryan and Will Kroos interrupted Richard Young’s plugging of No Gods No Masters 2 on March 1st to arrange a ‘Championship Selfie’ ahead of the Underground title main event. Ryan was in a bitchy mood, bringing out rivals Tom Weaver (with Blake) and Tyler Devlin, before casually mentioning how Weaver’s “banging [Tyler’s] sister”. This led to Weaver and Devlin brawling, but the silly boy forgot about Blake standing right there. Blake grabbed a production box and chokeslammed Devlin onto it. A sick bump, but Devlin got up quickly and seemed unhindered later on, so the point was…….?

A tag team match ended the first half as Raging Wood v2.0: Chuck Wood and farmer Jack Wellington (“From Emmerdale”) faced Simon Lancaster and Harry ‘the Hammer’ Winston. Wood explained his normal partner Tim Ber “couldn’t be here as he’s had a fall and nobody’s heard him”. Wood won with a cheeky roll-up on Lancaster in a ten-minute contest. Wellington showed a lot of promise but Raging Wood 1.0 is the money act. And as for their opponents? I would say they should stick to drawing the raffle, but they were terrible at that too. 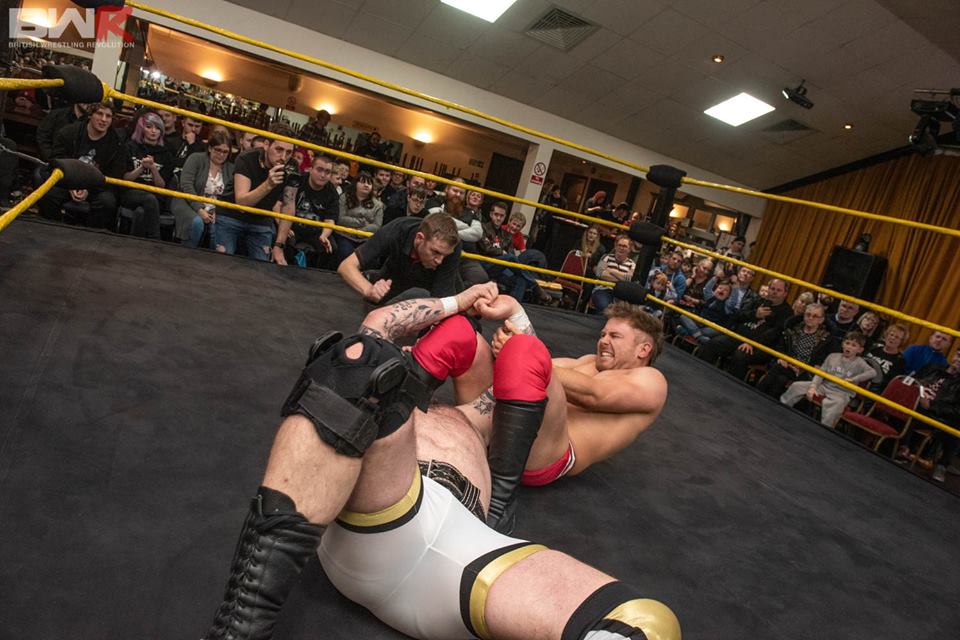 In the second half, Blake (coming out to Tom Weaver’s AARGGH I’M ANGRY music and Titantron) faced Kev Lloyd. Lloyd, getting some “Sexy Kev” chants from those familiar with his work, grounded Blake. He stomped on Blake’s hand several times, and locked in his armbar finisher, albeit outside the ring. When Kev picked him up, Blake shoved him shoulder first into the steel post. Blake’s offence was based around that from then on, but it was quite ineffective as Kev broke out a German Suplex and a Tiger Bomb. Lloyd locked in the armbar in the centre of the ring, which cued Tom Weaver – peeking through the backstage curtain all match – to distract the referee. Blake tapped but as it wasn’t seen, he blasted Kev with a shoulder barge and Muscle Buster for the tainted win.

Next, a surprise 4GW Exhibition Match. 4GW is based around Castleford, and I’m only familiar with them as a few friends watched Sabu perform his trademark dogshit match at one of their events a couple of years ago (Grimsby Central Hall’s had one of those too so they’re in good company). Future Breed Pro Wrestling contender JJ Barker put his 4GW Championship on the line in a triple-threat match against Tiger Jnr and Joel Redgrave. Never seeing these three before, they impressed with non-stop action. They got over Redgrave as the underdog against a cocky “12-year-old” and a disgruntled veteran. The final sequences saw Jnr, Barker and Redgrave eat a Penalty Kick, 619 and Codebreaker respectively. Barker’s Spiral Tap failed, and he took a hefty-looking legdrop from Tiger. Redgrave compromised Tiger, but a sly jumping Tornado DDT from Barker meant the “12-year-old” retained the gold. Really good stuff and the round of applause at the end indicated 4GW probably don’t need Sabu at future shows.

The main event was the 25-minute Scramble match for the new BWR Underground championship. It pitted Reese Ryan versus his bodyguard Will Kroos versus Tom Weaver versus Tyler Devlin. The final person to win a fall on anybody (not just the interim champion) would become the champion. Of course, Weaver and Devlin got right into it – Ryan and Kroos wisely spending the first several minutes enjoying the action from seats at ringside. Soon enough, they were cleared out of the way so Devlin could chop Weaver on the chair. Weaver responded by F5’ing him into the first and second row! How the hell do you top that with 20 minutes still to go? 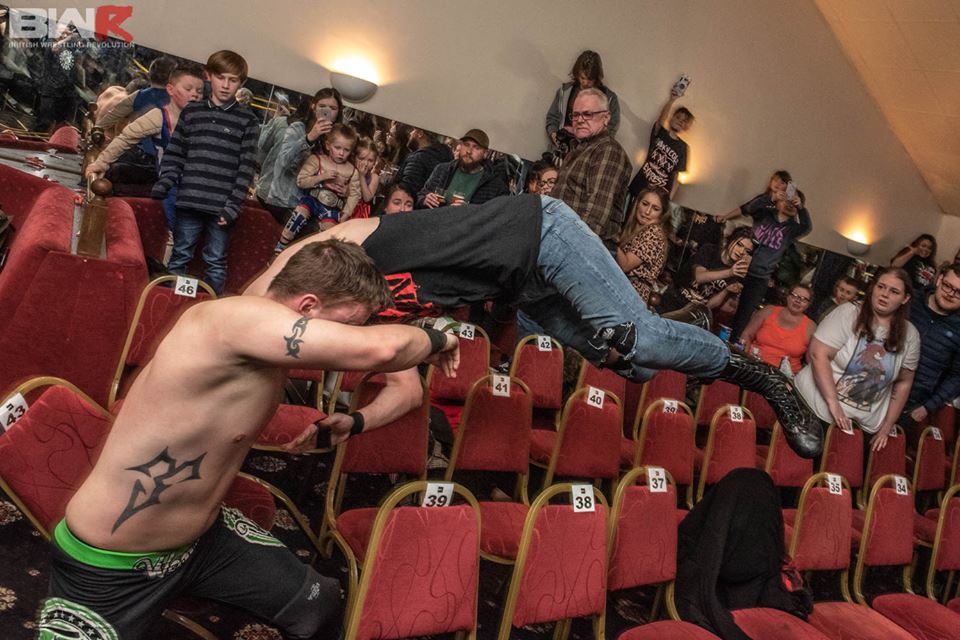 Very well, as it turns out. Will Kroos lifted Weaver into the Rikishi Driver to become the interim champion. Immediately Reese teased that Kroos should lay down for him, but negotiations were interrupted by Devlin reentering the fray. Weaver isolated Ryan and hit the Shining Wizard for the three count. He somehow convinced Devlin (silly boy) to team up on the much bigger Kroos. A few pump kicks later, Devlin went to the top while Weaver prepped for a cross body block – Kroos caught both men and slammed them! Shortly after, Ryan whacked Devlin in the back with a cane and slipped out of the ring so Weaver looked like the guilty party. The old rivals then went at it again.

The momentum of the match halted when it looked as if Ryan had badly injured his knee on a sunset flip. St John’s Ambulance (a basic requirement of running a wrestling show, remember) tended to him but it soon became obvious this was an angle. Phew. In the meantime, Devlin executed a Spanish Fly on Weaver which also took out Kroos. Kroos recovered and nailed a running springboard moonsault (!!!) and became champion once again. Will was almost pinned after Devlin delivered an impressive cradle-type driver but Weaver intercepted using the cane. A couple of minutes later, Kroos used the Rikishi Driver again on Weaver and – why the hell not – pinned to retain the interim title. One fan suggested that Kroos should run away, to which Kroos responded “and let someone else be pinned? That doesn’t make any sense”. Kroos would lose control, however, as Devlin levelled another cradle driver variation on him, only for Weaver to steal the pinfall.

In the final moments, Reese Ryan miraculously recovered and rolled up his unsuspecting bodyguard for the three count with 2 seconds left on the clock. Reese Ryan became the inaugural BWR Underground Champion! Kroos looked in despair after the match, shaking Ryan’s hand and walking away, before he charged back and hit a piledriver to the delight of the fans. I never thought Kroos in his current guise could be a good guy, but his ability to emote was superb. So we also have our first #1 contender for the title in place too as King of the Underground Redux ended.

I mean, what can I say? This was a free show for an event I had already got my money’s worth before it was abandoned. BWR could have thrown any old shite out there. Or, you know, not hold a show in the first place. Instead, they put on one of their best cards – topping some of their efforts at Memorial Hall. Despite the slightly insensitive ending (given the real situation last month), the main event was one of the best-booked matches in BWR history. Not to mention Joe Nelson and Brady Phillips and the 4GW lads killed it.

I can’t even say I’m being clouded by local pride at this point. I would travel to watch BWR like I do TIDAL and Fight Club Pro if they were based away from Grimsby. Their product is rock solid. If you’re into balls-out workrate, you should look elsewhere. But if you want a company built around local and lesser-known talent and logical booking that makes you want to go to the next show, a lost art in today’s British independent wrestling, then look no further than #GrimsbyGraps.

I will be back in a couple of weeks to review No Gods No Masters 2 from Cleethorpes Memorial Hall. Announced for the card so far:

Until then, you can find me shitposting on Twitter. Bye!