Guess who’s back? Back again.

Well im not slim, but im just as shady it’s the second times a charm edition of graps and naps giving @oggypart3 a well earned rest.

(And he was working so couldn’t review any pubs).

This edition takes us to the not so sunny climbs of Prestwich, Manchester for Futureshock Underground 30 for amongst other matches this was the semi’s and final of the legacy tournament.

Before seeing what went down a review of the pubs that were perused on along the way. 1st up was Wyldes which is a Joseph Holts pub that has undergone a massive revamp from a place frequented by the older generation to somewhere quite swanky. 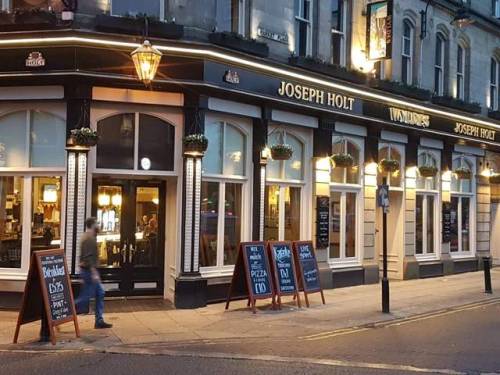 This includes a pizza oven next to the bar where you can get two pints and a 12 inch pizza for £10.

I had a pint of Crystal gold lager for a princely some of £2.89.

Next up was the Thirsty Fish which has been reviewed before and is always a good pint. This time I had a pint Moorhouses black moss stout at a round £3.

I was also given a stamp card to collect 10 stamps and get a free drink…like I need an excuse!

A quick tram journey to Prestwich and on to the next port of call to meet up with Chris Linay who was sat devouring his tea with his usual lager and coke combo. Whilst I was waiting I had a pint of Heineken at an eyewatering £4.55.

Jesus they should be wearing masks behind the bar, but worse was to come price wise. Last, but not least was a new bar called the Crooked man. 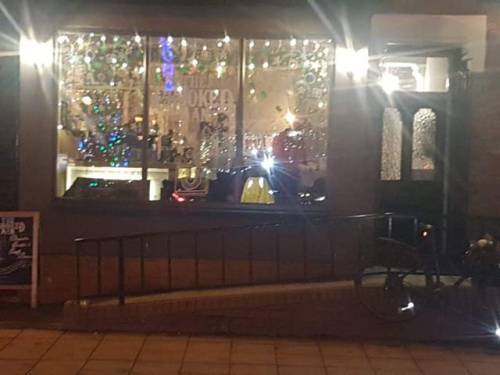 On first impressions it looked from outside like someone’s house that had been converted. 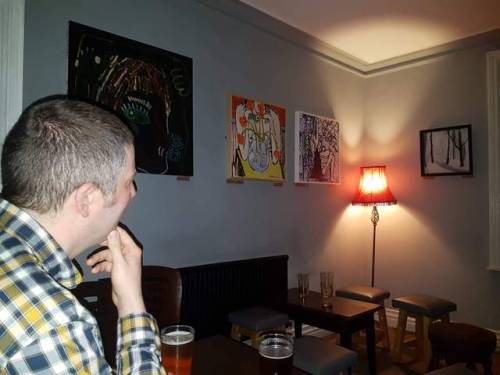 A pint of Shindigger big city life ipa was the call at a wallet melting £5.70. Needing a quick sit down from the shock we took the stairs into a room that looked very dark and mysterious with lots of amateur artwork adorning the walls which you can buy if that’s your thing.

Drinks done and it was off to the longfield suite to meet the rest of the gang. I had pints of jw less mpa at £3.20 and san miguel at £4 throughout the night.

Right then lets see what went down with the graps. 1st up was a legacy tournament semi-final between wwe u.k’s Wolfgang (golfwang) and now “serious ” kev lloyd.

The match starts with Wolfgang keeping kev at bay by getting ropebreaks whenever kev had a hold on. This led to wanger giving kev a knee to the gut and him putting the boots in.

Wolfgang distracted the ref and smacks lloyd with a pair of hidden brass knucks and then takes a turnbuckle pad off the corner. The ref collars wolfie and strips him of the knucks leading to Kev making a comeback ending with Wolfie hitting the metal turnbuckle and Kev taps him out with a cross armbreaker.

Next up is a women’s four way for the Futureshock women’s title with a feud that’s been around longer than the mother in law namely Lana Austin versus the faction of Ladies champ Molly Spartan, Kasey Owens and Jayla Dark.

The bees have been having a bit of a kerfuffle with Jayla being the one on the recieving end and this plays into the match. Starting off with a 3-1 beatdown of Lana till the inevitable miscommunication between Molly and Jayla when Molly hits an inadvertent forearm to her cohort.

Jayla explodes on Molly with corner splashes and an exploder suplex. Molly then gets rolled up for a 2 by Kasey.

Molly gets her revenge on Kasey by powerbombing Lana from the corner onto Kasey’s back and covers for another two count. Jayla then enters with a kendo stick and lays out her now ex partners leading to Lana hitting a ddt on Molly for the win and your neeeewwww women’s champion Lana Austin.

Third match in and it’s the 2nd legacy tournament semi-final between “Liverpool’s no1” Zack Gibson and “Gentlemen” John mcgregor who came to a cracking version of Aha’s Take on me..take on John..take John oooonnn etc.

Gibson gains control of John’s arm in the early stages, but Mcgregor comes back with a massive dropkick. John is soon down again after a thrusting double chop to his throat.

Zack then gets on his soapbox about Liverpool being top of the league and the way things are going they’ll still be there come May. Gibson carries on working the arm in preparation for his finisher the shankly gates, but John makes another comeback with a top rope dropkick and a backcracker on Gibbo for a 2.

John and Zack exchange shots till Gibson hits a clothesline that takes John out of his boots…Jeeezus! The finish comes when from out of nowhere John gets a cheeky roll up for the win and sets up a battle of the former sexy gents in the final.

Half time main event and it’s a no dq tag team title match between the champs T-bone and Chris Ridgeway and challengers Danny Hope and Chris Egan. You know when shit’s going down when in honour of an El Ligero hardcore match everyone bar T-bone was wearing pants. Ridders had his trackies, Danny’s “paaaaaaannnnnttttssss” had tassles on them and topping that Egan with his sports direct slazenger trackies still with the price labels attached accompanied with a Tommy Dreamer esc Ecw t-shirt.

Highlights at the start of this wild brawl include T-bone piledriving Hope on the stage, Egan getting a razor’s edge into the ring where the waiting Ridgeway greets him with a boot on the way back in and then being put in a half crab and being whipped with T -bone’s leather belt.

Egan continues to get a pasting with kicks to the back by ridders which looked like bloody murder.

The mayhem continues as Egan finally manages a comeback and puts T-bone into a chair and then again with a side suplex for a two count.

Hope and Egan are now on the offensive with the help of a fire extinguisher, chair shots and a baking tray which all resorts in all for men going down.

T-bone makes a recovery and spears Hope off the ring and through a table on the outside. In ring Egan backs Ridgeway into a corner and starts throwing Kenta Kobashi style chops.

Ridders reverses this attack and puts poor Egan through a chair with a brainbuster for another two count.

The end of this wild match when T-bone is put through another table and is pinned for a three.

A cracking match by all four and in particular Chris Egan who took an absolute towelling and kept going (check out the half time photos on Futureshock’s facebook page where he looks like he’s been through the mill). 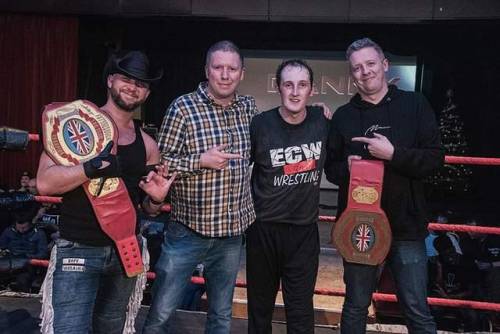 Half time and I bumped into Lana Austin at the merch table and had a random convo that went from her chocolate needs to explaining my dog’s dislike for doggy chocolate advent calendars.

The second half starts with Soner Durson vs James Drake. Multiple armdrags by both men at the beginning ending in a standoff until Drake hits Soner with elbows to turn the crowd. 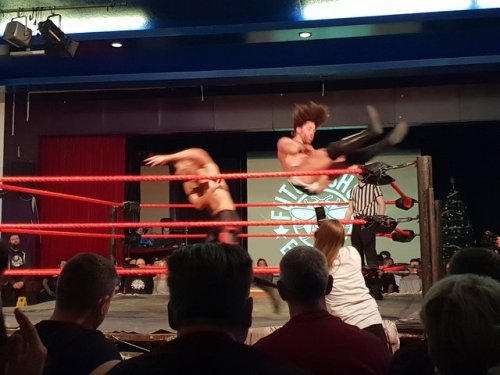 Durson comes back with a skytwister press but ends up eating a flying knee which in turn generates his infamous FACEPANTS chants. Soner comes back with a dive to the floor, a underhook suplex and an rko over the ropes.

Drake manages to down Durson with a 450 splash for a two. Durson continues with a dropkick in the corner and finishes Drake off with a sonisphere and a frog splash for the win.

As Soner celebrates a video message plays for him and Christmas comes early as at the next futureshock underground 31 in February 2019 it’s Soner vs PAC!!! #PACINPRESTWICH. 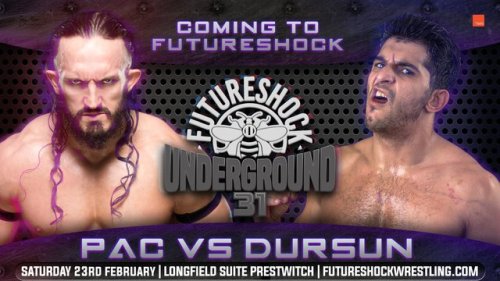 Joe gets pelted with the usual variety of size based chants which riles him up to say it’s chest day every day and then Ethan plants him.

Ethan ends up getting a pounding until Jacob’s makes the hot tag and hits dvd and then an assisted backcracker for a near fall.

Big and braves associate (Nordic accountant) Thomas Wolfe interferes with a chokeslam and sets up Deadly Damon with the pin for in my eyes a suprise win.

Main event time and the legacy tournament final between the former sexy gents team of Kevin Lloyd and John McGregor. 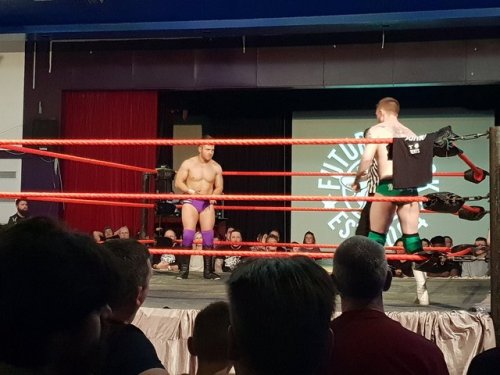 The match starts tentatively with Kev in particular not wanting to go for the kill. Kev manages to get a suplex into a pin for a two.

John makes a comeback with a suplex of his own and a cartwheel into a superkick. Lloyd turns the tide with three powerbombs, but only gets a two count.

Kev kicks John,but then receives a powerbomb of his own. The end comes when John gets a heel hook and then a pin for the tournament win.

A well deserved win for John is cut short as sirens can be heard and out from the back comes Futureshock champion Crater to lay waste to the lads in the ring.

Before this can happen Henry t Grodd comes through the crowd and fends Crater off to the back. This down it’s a time for celebration as Kev and John hug in the ring and all is good in the world.

A cracking show by all accounts with new feuds, storyline progression, debut announcements and by the looks of James Drake and Zack Gibson maybe even goodbyes.

Next Futureshock show is in Stockport 20th January 2019 and with that all that said happy new year to one and all and I can’t wait to see where Brit wres goes next year.