Hello and welcome everyone to Graps and Claps first trip of 2019 taking me to the Brudenell Social Club in Leeds for RISE Wrestling and their big Rumble spectacular.

Now this is my return to see RISE, after a successful viewing of their product back in 2018 for the Ascent Tournament and I think what brought me back is the unique atmosphere and product that is on offer, making it different from anything else you would generally see on the Britwres scene.

Before the journey to Leeds, I went for one pint in Manchester taking in the Samuel Smiths no swearing haven of Sinclair’s Oyster Bar for a £2.30 pint of Extra Stout that was chilled maybe a bit too much to give it a watery taste.

Arriving in Leeds at 330pm, we dropped our bags off at the local Travelodge on Vicar Lane costing £36 for the evening, the stopover was due once again to the abysmal train service from Northern Rail that has hit the North on every Saturday since October it seems – utter shower of shite! Leaving the hotel it was time to make our way to the meet up pub of The Fenton to meet Graps and Claps guest writer Andrew Campbell and his mate Damien.

Now if you remember rightly from around a year and a half ago, The Fenton was home to meet up’s before Tidal Wrestling’s shows at Church when they were still a thing till they moved to the Temple of Boom. Back then I would have said this was in my top three pubs of that year, so lets see what it offered this time.

Well the aroma of damp and toilets hits you straight in your face once you walked in, which knocked it down a few points but the quality of the beer and the jukebox in here still made it a worthwhile visit with a good pint of an Abbeydale Brewery 6.9% IPA being the drink of choice.

Next up on the road to the venue was a visit to The Packhorse pub that looked a bit rough and ready and didn’t have a great selection of beer but nonetheless it did serve a good pint of Titanic Plum Porter – £3.60, less said the better about Andrew’s pint of Leeds Pale Ale which he left nearly all of it!

Last pub before going in was one of them old Screen pubs called The Library for a smoky pint of Sonnet Brewerys Miss Scarlet Revolver (6.8% £4.80) that wasn’t too bad but nothing to eulogise about.

The walk to the Brudenell is a dicey one especially in the dark through a park, I am glad someone was with me and this could be a prime mugging spot. The venue itself is located next to an Indian Cash and Carry and is split into two with one half being a social club area and the concert venue being in the other half holding a 300 capacity with tonights show selling out, this was a standing room only tightly packed especially when the Rumble got going.

Drinks in here were vast including a £3.10 pint of Kirkstall Brewery Three Swords and £5.50 pints of 8% Hopbullet which our Geoff had a few of on the evening. Their was a pre-show with two matches which we didn’t get to see, but from my meeting with ace photographer Carl Gac, their was lots of tomato ketchup used as it was over his t-shirt when I saw him.

Anyways lets get into the wrestling which was a 5 match show which included the Rumble. First off we had a rematch from December’s RISE show with El Gringo Craig West taking on CJ Banks. Banks got on the offence early on hitting a knee to West’s back for a two count. 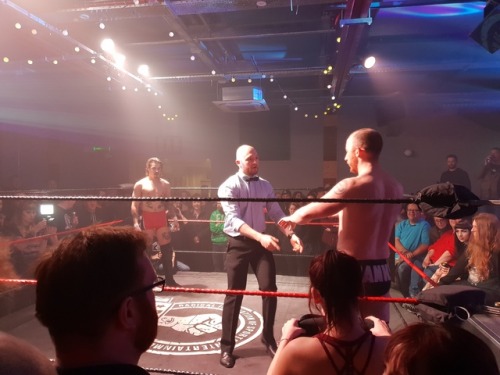 West hit an Underhook suplex as he made a comeback for 2 a two count then followed up by hitting  back bump to cj on the ropes for 2. That was as good as it got for West as the referee Cowboy John got hit from behind after a push, leading to CJ rolling up West from behind to get the 3 count for the win in a good opener. 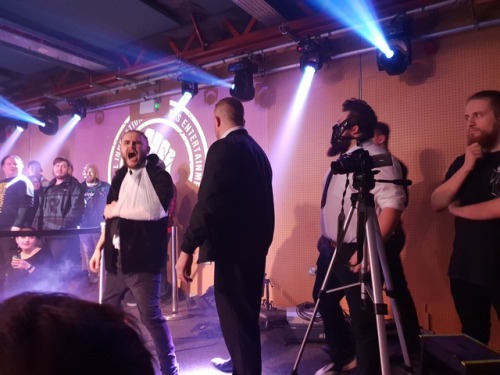 Next up we had a long interview segment with the main baddie faction of S.O.B.E.R where we would find out who is Myles Kayman’s dad, which turned out to be J.G Nash. During this we also had a visit from the team of  Boyz to Men (Crashboat elsewhere) where they were told by RISE head honcho Daniel O’Doherty that they had to earn their spot in the Rumble by facing Myles Kayman and B.A Rose later in the show. Things got worse for the Boyz as they were laid to waste especially Boy 2 who got hit with a Jay Driller by Rose to incapacitate him for the tag match later in the show, leaving Boy 1 to find a tag team partner to help him get in the Rumble.

Women’s action next with the Rise Women’s Champion ‘The Voodoo Queen’ Amarah taking on Nightshade who has Championship pedigree herself as she currently holds the PCW Women’s Title.

Early on Nightshade played Chicken on the outside trying to avoid Amarah as the crowd chanted ‘Lampshade’ at her. Nightshade once back in the ring hit a back drop off the ropes to Amarahand then three running splashes in the corner followed up by a Cannonball fpr a two. Thankfully for Amarah and her title she made a spirited comeback finishing off Nightshade with a Death Valley Driver for the three count in what was a good match, but very much differing opinions from a few people near me ranging from very good to shite.

Last match before the Rumble was the tag match to see if Boyz to Men would be able to enter the Rumble, but only if they beat the S.O.B.E.R team of Myles Kayman and B.A Rose. With Boy 1 (Jack Bandicoot) being on his own he had to suffer a prolonged beatdown by both Rose and Kayman, that was until jilted and former member of S.O.B.E.R, Sean Only came out to help out his former friend Boy 1 in his quest to get in the Rumble. 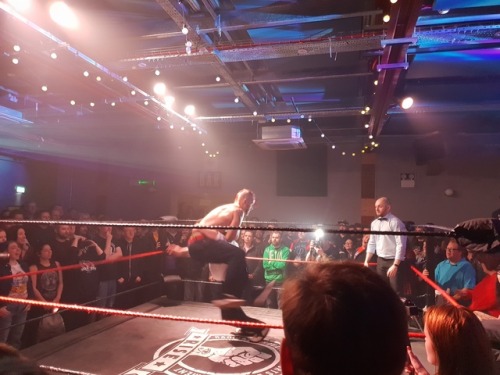 This turned fruitful as Only hit a curb stomp and this was followed up by a big splash by Boy 1 to Kayman to get the three count in a fun match and with a great response to the appearance of Only to help Boy 1.

20 minute half-time break over and it was now time for the RISE Rumble with a total of 30 combatants plus a number of possible surprises in store, this was sure to be a great hour or so’s worth of entertainment. It also felt like the crowd had swelled at this point with the depth of the crowd to the ring being three or four deep reminiscent of queuing for a pint in Wetherspoons. Opening proceedings from Number one was current RISE Champion Dr. Leonardo Darwin who is very much apart from the S.O.B.E.R group – the most hated man in this company and it has to be said he does get a great heated reaction. Darwin was looking to win the Rumble for the second year running after last year eliminating his former best mate BIG JOE (Yorkshire Version) and as we would see he would end up going very close indeed!

Notable highlights and appearances in this Rumble including seeing Kev Lloyd back in his Sexy Kev policeman’s garb which got a great reaction especially from our section. We had appearances from a couple of the NXT UK contracted superstars in the form of Amir Jordan who had the Rise faithful dancing along to his Banghra inspired entrance and as we would find out later on we had Saxon Huxley who came in to eliminate Boris Koslov to a chorus of boos. 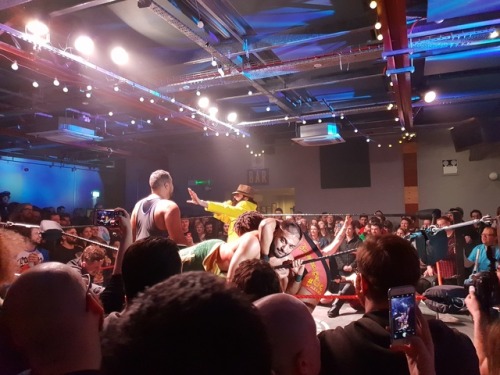 Koslov who was making a surprise return to RISE after losing a loser leaves town match against Martin Kirby around 5/6 months ago and was sorely missed by the RISE audience as he was something of a cult hero to this crowd. The reaction to Koslov’s appearance  was a huge one with people jumping up and down into other people’s arms but as said previously, the mood came crashing down as he was eliminated by Huxley – BOOOO!! 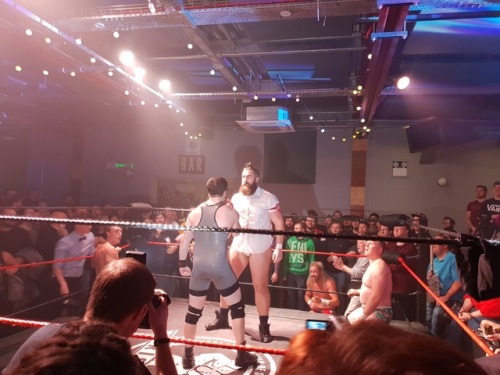 Along the way as well we had the staredown that the whole of Britwres wanted in the form of BIG JOE (North West) vs BIG JOE (Yorkshire) – this was akin to Hogan vs Andre but in a Leeds Social Club on a Saturday night. The appearance of BIG JOE (North West) broughts screams of joy from this writer that managed to get a bit of a grumpy face from the bald chap in front of me who must be a right fun sponge in real life 🙄 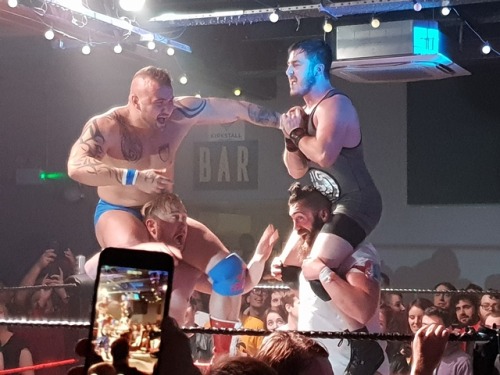 One sight that has just brought flashbacks to me while I write this is the sight of BULK getting his arse out in the ring to do a stinkface – oh my word this was a sight to behold for the wrong reasons.

After well over an hour of action though we got to our final two with the aforementioned and hated Dr. Leonardo Darwin squaring off with his nemesis BIG F’N JOE, with the crowd fully behind the latter JOE managed to topple Darwin over the top rope to get the victory to win the RISE Heavyweight Championship to spark off scenes of jubilation as fans got in the ring to celebrate with the new Champion. 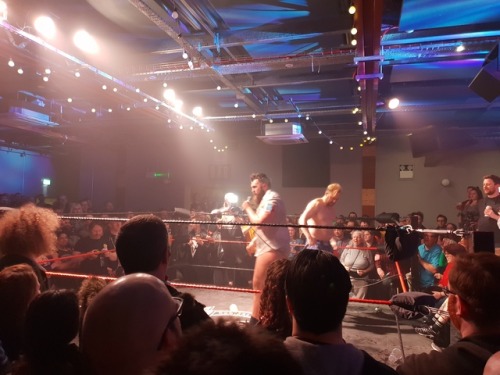 Show done, it was time make our way back to the hotel via a visit to Taco Bell for some after show scran to send us packing to bed at a fairly early for us two – 1130pm.

In closing, this show was a great show to be a part of from a live experience especially for the Rumble which was an excellent watch, also for a venue the Brudenell hits all the correct notes with beer choice, price and quality. If you do have a free time in your wrestling calendar, make sure you give a RISE show a go as it is different from anything else that is out there in Britain!

As ever, I hope you have enjoyed reading and go and give this a like, retweet or a share and I will see you next time with a review of PCW’s show next Saturday before NXTUK Takeover in Blackpool – so until then BYE!!!