Hello and welcome everyone to the edition of Graps bringing you a rundown of what went down on a big northern weekender for Progress wrestling in Manchester and Sheffield respectively with two sold out crowds in attendance and also on paper some absolute corking matches it was hoped to provide a great end to 2018 in the North for Progress.

How we are going to do this, is I will pick out some of the highs and some of the lows over the weekend and also tell you about the all important pub visits, so without further ado lets get into what went down!

LAX vs CCK (Manchester) – Even though this was meant to be a run of the mill tag team match with the prize of becoming the No.1 contenders the next day vs Aussie Open it was certain to be a great contest, but somewhere along the way this somehow turned into a tornado tag with the referee losing all control of what was going on in the ring. The crowd throughout this contest were electric, including my good self jumping up and down at the end watching in awe at the smooth as silk wrestling and some great saves to cause two counts.

One thing that wasn’t smooth as silk was our Geoff’s attempt at trying to get over the Rachel Stevens classic ‘Sweet Dreams My L.A Ex’ which was greeted with a look of disdain from Chris Brookes Ha!

In the end the winners were LAX after 20 odd minutes of madness that for tag team wrestling in the U.K it doesn’t get much better than this, as sad as it is to see Kid Lykos on the sidelines the addition of Jonathan Gresham by the side of Chris Brookes has proven to be fruitful – he is just so smooth in his transitions from move to move and its just mad how he hasn’t been over more in the last few years. 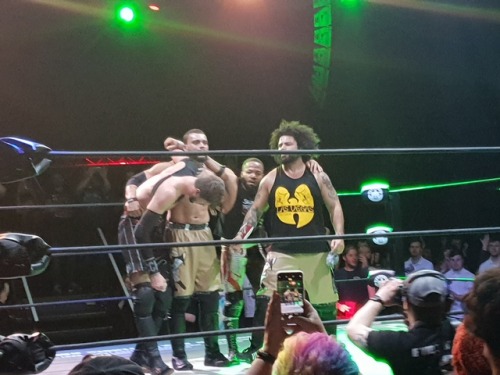 Sadly though for LAX they were unable to get the job done once again as they fell to Aussie Open in the Sheffield Main Event when their chances died due to an elevated fidget spinner by Davis and Fletcher in another fantastic tag team match. What it does say is that I want to get back into watching TNA because of LAX – they are bloody brilliant!!

Ilja vs Tyler Bate (Manchester) – For me on Saturday’s show this was the one that took it from an average show to one that reached level 100 after this. One thing to say from this weekend was how over Ilja was with the Northern crowd compared to his lukewarm receptions he has had down south – maybe the song of the weekend was the tune embracing ILJA to ‘Feed the World’ by Band Aid! We actually thought it up around 12 months ago but has only caught on now – certainly a give it time tune.

The cheers for Ilja against a popular fan favourite like Tyler was great to hear and also in the end seeing Ilja finally pick up a win in Progress at the third attempt with the torpedo moscow was great, as when you see the losses mounting up like Mark Andrews, the credibility and star aura whittles away. 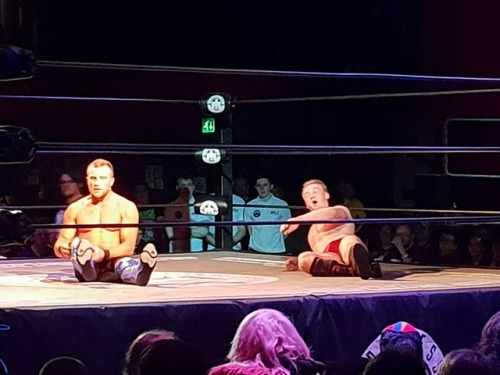 As we find out in Sheffield though, Ilja would return to losing ways against ‘The Kiwi Buzzsaw’ Travis Banks but by nefarious means as Banks swiftly kicked Ilja in the bolsheviks to send him crumbling to a loss in a really good opener despite Ilja messing up a 619 lariat which thankfully he managed to hit on a second occasion.

Travis Banks it does have to be said as with Toni Storm later on in the show at Sheffield are both looking in tremendous physical shape, god knows what it is in that WWE UK Training Plan, but I could do with some of it – they are certainly not on ten pints of old and filthy like me.

Chris Ridgeway vs Paul Robinson (Manchester) – In a continuation of a challenge that was set from the last chapter in Manchester, the battle to see who was really the hardest as fuck as Paul Robinson took on Chris Ridgeway. From the early going from Robbo’s change of attire to his Saturday P.E kit to an early striking battle this instantly stuck out as different from everything else that was on offer on Saturday afternoon.

The main news from this match was possibly the finish as Ridgeway had just hit a roundhouse kick to Robbo and then a German Suplex for a two – Riddy was well on his way to victory but with the referee distracted, Robinson outsmarted Ridgeway by clocking him with a chain that he had acquired from under the ring, which then set up a rematch the next day in Sheffield in a Chain match of all things. 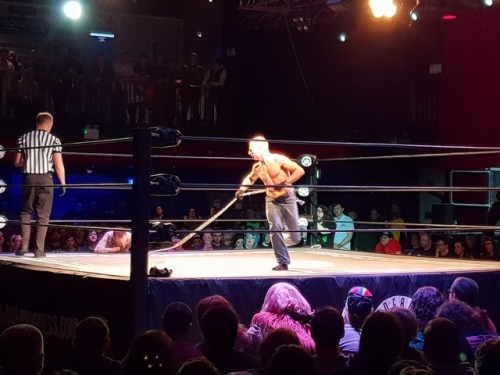 Sadly though the rematch felt completely flat compared to the very good opening match in Manchester the day before. The jangling of the chain made the match sound more festive than the sound of brutality – Ridgeway got the win by choking out Robinson, but for what could have been a feud built over a number of shows ending in something like this, it ended the feud like a wet fart in church.

The Ballad of Mark Andrews – Now Mark Andrews was hoping that this weekend would get his juices flowing and more importantly get some much needed wins in the win column as he is on a losing streak not seen since David Starr in the UK in 2017.

Andrews last victory being against El Phantasmo in July, the time for a win was now for Andrews who in most Progress fans eyes now is a loser but not in a good way. Being stood in Sheffield yesterday I even heard the first murmuring’s of boos for someone as likeable as Andrews, the Eddie Dennis feud even though it started off great as a feud – the Wembley match and the case of the tables not breaking halted any momentum that feud had dead on the canvas at Wembley Arena.

The general consensus in that feud though was that everyone including myself were rooting for Eddie Dennis who came and spit some very truthful lines about Andrews being too bothered about playing pop punk rocker more than actual wrestler which you can’t argue with as he generally on does Progress and the odd 205live show.

This weekend Andrews was looking to at least pick up one victory to give him something to cheer about – his opponents were none other than old rival Pete Dunne in Manchester and Mark Haskins in Sheffield.

The Dunne match in Manchester was very much a greatest hits show with the action 100mph in which Dunne put away Andrews with a Bitter End for the three count and to rub salt in the wound Andrews was then beaten down by new group ‘Do Not Resusitate’ but was saved by both Pete Dunne and Eddie Dennis who chased off DNR to the back.

The tease though after when it looked like Eddie and Andrews could be getting back together, made me think what a waste the last year of storylines between the two could be if it is soon reneged in the space of two months, but we will just have to see as it is played out in the coming months – just putting it out there I wouldn’t mind seeing a bad guy Mark Andrews to give him a fresh coat of paint.

The next evening though it was a case of different day same result as Andrews once again came away on the losing side of things by an arm submission locked in by Mark Haskins in a decent ten minute match up, similar to the day before though as D.N.R ran in again to attack Andrews and Mr and Mrs Haskins which led to Eddie Dennis once again making the save for his former friend. 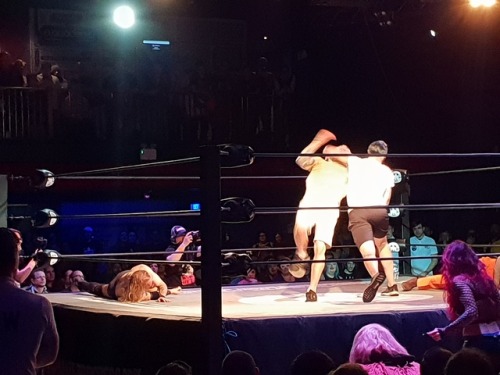 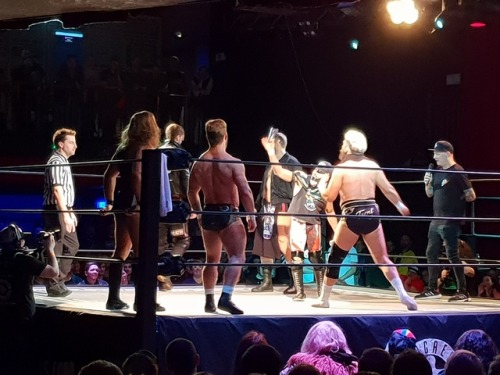 Speculation about this weekend possibly being the last Progress appearance for British Strong Style was rife in the time running up to show week, with people thinking that D.N.R would be the ones to put BSS out to pasture into WWE but sadly that didn’t materialise as we were instead given what would be a better match all together as British Strong Style took on CCK (Timothy Thatcher, Jonathan Gresham and Chris Brookes).

A lot of the early going on was played for laughs like most BSS 6 man matches, but somewhere a spark was lit under this match and due to the nature of the lucha rules stipulation this went all around the 02 Academy for a good 15 minutes which ended with Chris Brookes being the fall guy as he was put away with a multitude of moves ending in Tyler Bate hitting a Spiral Tap to Brookes to get the 3 count in a popular victory for the BSS boys – so the speculation now will be – Unboxing final appearance???

The two main single matches on Sunday with Toni Storm taking on Jordynne Grace and Walter vs Shingehiro Irie both succeded in getting in Jordynne’s case as the main challenger to current champion Jinny as she dispatched what looks like a departing Toni Storm with a pumphandle bomb in a good contest but nothing really blowaway.

In the other we had Walter defending his Progress Title against Shingehiro Irie in what was a dominant performance by the big Austrian apart from one moment where Irie managed to suplex Walter from the top rope to a great pop. The sheer weight of Walter’s chops, big boots (das boot) and a huge JOHN WOO! to Irie’s mush just proved too powerful for Irie to withstand as he fell to tapout – who is going to beat Walter you have to really wonder now folks!

So in closing about the two shows, I would certainly recommend Ilja’s matches against both Bate and Banks respectively, the Manchester Robbo/Ridgeway match is worth your time, obviously both Main Event tag matches with preference for the CCK vs LAX match being the one to take time to watch – it was just outstanding! From sunday as well check out the 6 man and Haskins vs Andrews as matches to watch. 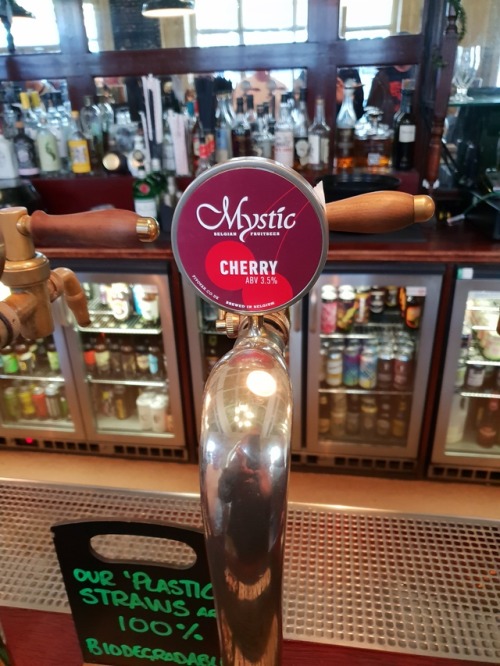 Above you, you will see what was the beer of the weekend and also a front runner for beer of the year. At £7 a pint and despite being only 3.5% in volume, the smell and taste of cherry syrup in a glass was to die for – this was had at The Sheffield Tap which is a must go to pub if you are visting the Steel City in the future for either Progress, Southside or Breed Wrestling! 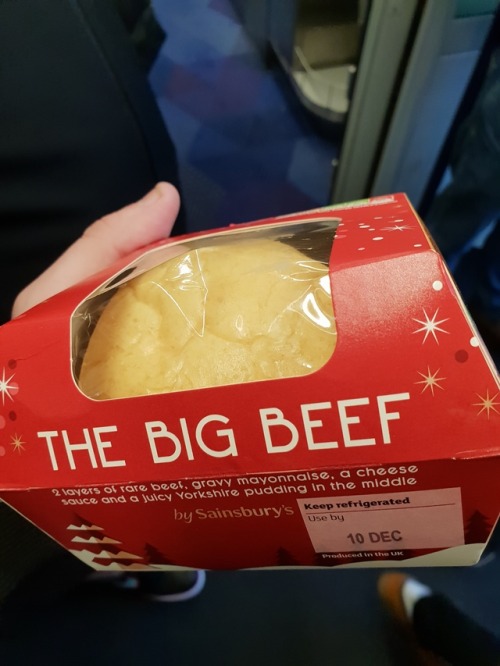 From a food perspective, the above sounded good in practice but the finish was very much lacking in much needed condiments. Still today I am wondering where was the gravy mayo?? 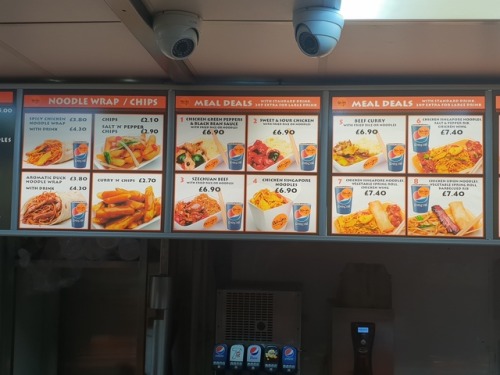 On the other hand go and give Dai Pai Dong a visit in the Manchester Arndake Market if you like your chinese inspired food and it won’t break the bank whilst your at it, with a meal and a drink costing roughly £7. 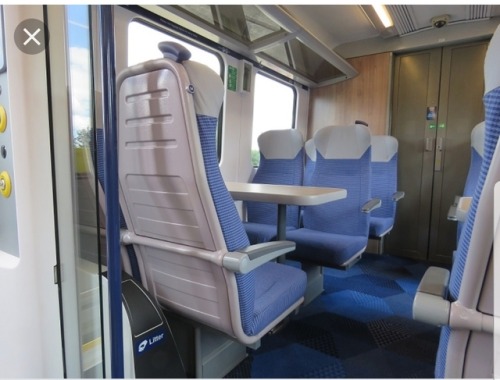 Plug-gate – Why do Transpennine Express insist having their plug sockets on an angle instead of straight on! This somehow got my ire that left me in a laughing heap of a mess and also led to me getting told off by the ticket lady for saying the f word when I was mid rant about plugs!

With that all said and done, I hope you have enjoyed reading this review and please give it all the likes and shares and I will see you next time for Tidal Wrestlings final show of the year on Sunday – so until then BYE!!