Hello and welcome everyone to part 2 of this week’s wrestling cavalcade, this time taking me once again to The Frog and Bucket Comedy Club for IPW Tuesday Night Graps for the Hard as Fuck clash sponsored by Fiery Jack between Timothy Thatcher and Chris Ridgeway.

As ever with a trip to the Frog and Bucket, the usual meet up took place in The Crown and Kettle which once again is in the running for the ‘Pub of the Year’ award from Graps and Claps. As mentioned in the last edition a tap takeover from Wilde Child Brewery was in operation once again with an amazing amount of beers on offer, myself I had 4 different pints including : Absolute Impeachment, Chasing Epiphany, Adoption Process and a banofee stout for which the passion fruit flavoured Adoption Process standing out as the best drink of the 4 whilst accompnying a scotch egg from the wonderful Beehive Foods of Manchester.

The best of the bunch that I did try was a 11% Triple IPA that Chris Linay was having a pint of – fruity, smooth but packing a heavy alcoholic punch this was properly good stuff. 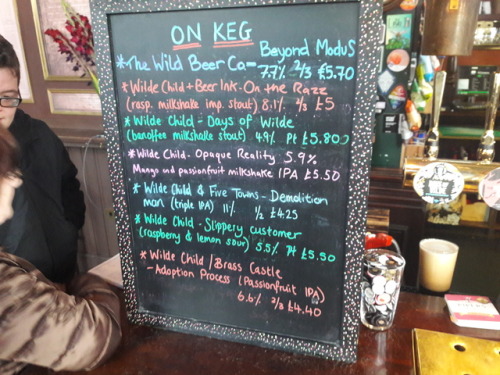 Drinks thankfully done in this pub before I got too rat arsed which I would gladly do off this breweries drink, we left to walk across the road to the venue.

A sold out crowd was once again in attendance for another Tuesday night fun fest that IPW has carried on from the now defunct Lucha Forever. So with that said let’s get into what went down, as we kicked things off with the current IPW Champion Kip Sabian offering out anyone in the back for an open challenge to start proceedings, with the lucky person being none other than former wXw Heavyweight Champion Bad Bones which was a nice surprise. 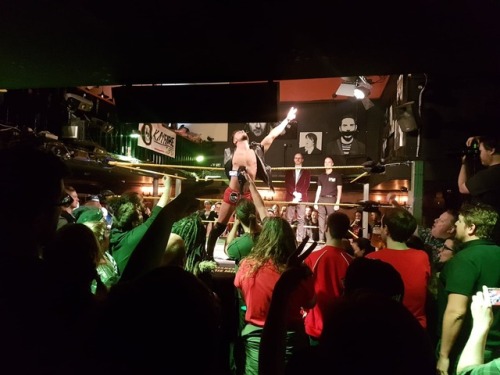 As an opening contest this was a fine opener with Bones dominating the chicken shit heel that is Sabian, but ultimately coming up short in the end as Sabian beat Bones with a Double Stomp in just under 15 minutes. It has to be said that within the space of a year and half Sabian has become excellent and for me is one of the highlights of the World of Sport wrestling show.

Next up we had a 4-way match with the newly turned in IPW and current Z-Force Champion Jack Sexsmith who was also carrying some extra bumfluff on his chin taking on Chuck Mambo, David Starr and fresh from getting an E in French – Joe Nelson. Initial thinking in this match was Sexsmith and Starr despite being opponents were going to play their friendship from their Sexy Starr tandem into this match. 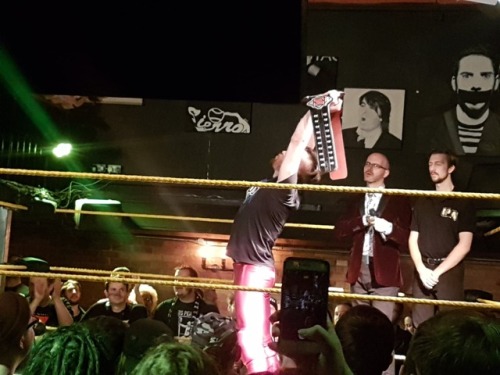 It has to be said though despite the Baby Shark chants starting once again for Starr, the crowd only wanted one winner here and that was Joe Nelson for who the Manchester crowd have taken to their hearts. Nelson was out of the traps quick here laying in dropkicks to his opponents instantly putting them on the back foot, but with said teamwork from Starr and Sexsmith they managed to hit Nelson with a doomsday foot stomp.

Unfortunately that is where the pleasantries ended as Sexsmith turned on Starr by rolling him up from behind to get the 3 count – BOOOO!!

Next match was supposed to be Drew Parker taking on Jimmy Havoc but due to unforseen circumstances Jimmy was nowhere to be seen. So instead we had a match still involving Drew Parker but instead of Jimmy he was facing Joey Janela’s arch nemesis -The Invisible Man.

I have to say this was fun for what it was, but nowhere near the level of Janela’s Blackpool match with Mr. Invisible, seeing that there was another comedy match up after this, they could have instead used Amir Jordan or Gabriel Kidd who were in attendance instead probably to make it more watchable.

Anyways this match ended when Parker had a Canadian destroyer of his own reversed by the Invisible Man who hit a reverse rana and pinned Parker in just over 7 minutes to end this match. 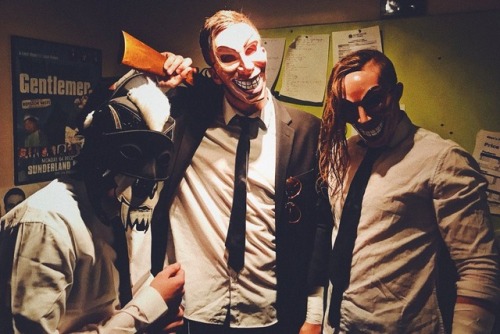 Half time Main Event now and what a barnstormer of a match from a comedy side this was as Aussie Open collided with Kyle Fletcher teaming with Chris Brookes with Kid Lykos in their corner all kitted out in Reservoir Dogs inspired outfits taking on the popo team of Chief Deputy Dunne and Junior Officer Mark ‘Dunky’ Davis. 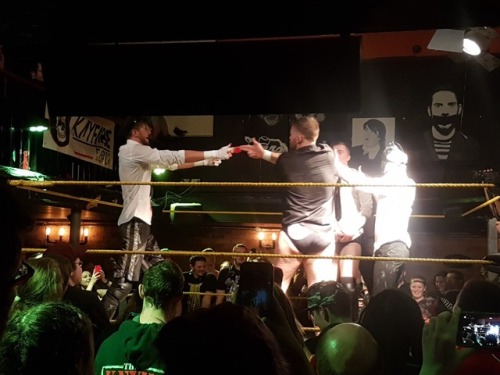 With 3 being in the corner, Dunne and Davis decided to bring themselves some back up in the form of Inflatable Lykos to a huge ovation from the crowd with the thought of a possible Lykos vs Lykos collision evoking memories of Taker vs Taker. When the Inflatable came in it hit its customary huaracarana and famed balcony dive to Fletcher, Lykos and Brookes flattening them once it hit.

From my section in the crowd, we even had a singalong of the theme from The Full Monty just for Mark Davis’s attire as he looked like an extra from said film.

Near the end of the match we had a remake of the famous ear cutting scene as Chris Brookes cut the ear of a tied up Damien Dunne leaving him in a pool of fake blood, we also had Dunne accidently shooting Kyle Fletcher which led to Mark Davis turning on his partner and using his Piledriver of Doom to Dunne to leave Brookes to pick up the pieces and get the win for his team.

This was a fantastic 15/20 minute match that was outstanding from a creative point of view e.g. The right amount of comedy that hit all the right notes with the audience – I for one would like to spend a day living in Chris Brookes’ mind it must be magical.

After the break with my £2 raffle strip bought we came back with Triple Threat action with El Ligero taking on Mark Haskins and Eddie Dennis with the latter coming out to his lesser heard tune of ‘Party Hard’ which is still a banger to this day. Funny that we will see a totally different side of Eddie on Sunday at Wembley where I think he will beat his nemesis Mark Andrews. 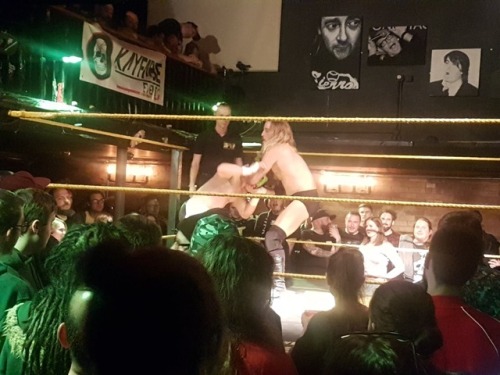 The start of this match started off with a triple arm lock up but ended with Haskins booting Eddie in the stomach to get the early advantage. Despite this setback, Denns hit a huge double slam to Haskins and Ligero for a 2, Ligs also hit a big splash to Haskins for a 2. It was Haskins though who would get the victory on this evening as he made Eddie Dennis tap out to the Sharpshooter to get the victory. This was a really good match between 3 of the best around today! Dennis it has to be said looks in tip top shape.

Before the Main Event we had the result of said raffle with No.191 proving fruitful for yours truly as I won third prize of a big bottle of champers to take all the way back to Rochdale to gather dust in my cocktail cabinet. 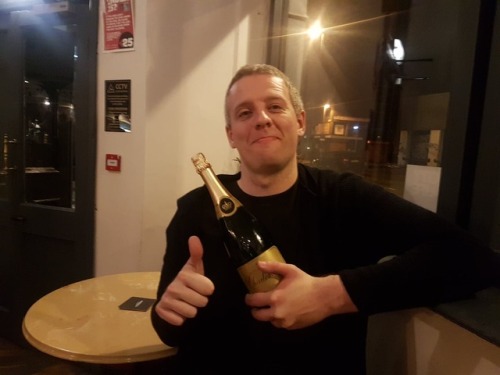 Pictured: One tired lad bunged up with his raffle prize. 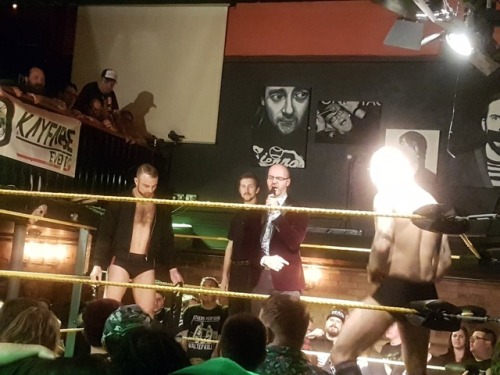 Main event time now with the ‘Hard as Fuck’ battle between Ringkampf’s own Timothy Thatcher taking on our honorary Tuesday Night Graps Champion Chris Ridgeway in a hotly anticipated battle which lived up the hype. As expected we started with a grappling masterclass on the mat with Thatcher gettong the best of the early exchanges, one thing you notice early is the sheer size of Thatcher who was twice the size of Ridgeway – this man is a beast!

Ridgeway despite the height defecit used his top notch striking ability to wind Thatcher and it was to be a running punt to the chest of Thatcher that would get the victory in around 15 minutes to end an excellent physical battle and miles better than there initial clash a couple of years ago for PCW in Liverpool.

Drinks in here were the usual Shedhead and M.P.A so nothing great to write home about from a quality standpoint.

So there you go another Tuesday Night Graps done and one that will be remembered for the Bad Bones vs Kip Sabian match, the Half time tag match and also the main event which you should try to check out on IPW On Demand – top show and evening that ended with a half pint in The Smithfield Tavern before setting off back to the Dale for 11:05pm.

I hope you have enjoyed once again reading this review and I will be back.at the weekend with a review of Fight Club Pro’s Project Mayhem Night One. So until then – BYE!!