Hello and welcome everyone to another edition of Graps and Claps. With Andy Ogden knee deep in a vegan curry over in Leeds, I’ve stepped in to take over at the Stockport Masonic Guildhall for FutureShock Uproar 103. As a cold wind swept through the North West, it’s lucky this was the hottest ticket in town as the crowds queued down the street to catch David Starr’s debut.

After smashing out a 5K run in Manchester in the morning, pre-show drinking wasn’t on the cards, but I can fill you in on a couple I had on Saturday in the city centre. Café Beermoth for a Cigar City IPA called ‘Invasion’. £4.30 for a half pint, nice enough but I would have expected more for the price. There also wasn’t any wifi of phone signal, so I made haste on to Brewdog for a half on Lost Lager. Decent pilsner, and half the price, definite winner of the two.

Anyway, onto the action on Sunday night. After a stop at KFC as a post-race treat, we drove up to the venue. We arrived after the scheduled door open time and everyone was stood outside.

After a 15-minute wait in the warmth and safety of the car park, we made our way in, but still had to wait in the cold. One day wrestling shows will start on time… one day.

It was around 18:15 when the action got underway, John McGregor against Isiah Quinn in the FutureShock Legacy first-round match.

The man from the Temple of Salvation picked up a big win in Prestwich last time out so was given this chance and for the early period he had control over ‘Just’ John McGregor. The former tag champ fought his way back and after nailing a back-stabber off the middle turnbuckle he cinched in the ankle lock which turned into a single leg figure four and Quinn’s guiding light was turned off. McGregor advances, leading the pumped Stockport crowd in a rendition of A-Ha’s ‘Take on Me.’

Next was a non-title match as the Monster Crater took on the debuting Joe Bailey from Blackpool. This was always going to be a squash match, but Bailey did his best, eventually getting the champ off his feet with a nice Belly-to-Back suplex on the 35-stone monster.

Cyanid…Crater got mad and destroyed Bailey with his Rock Bottom-backbreaker after the newbie upset him with a clothesline in the corner. After the match Crater’s former stable-mate Henry T Grodd came out to tell the champ ‘Monsters can be hunted’, demanding a title shot when we return to the Guild Hall in the new year. Grod is a big lad, so maybe maybe we might actually have a match on our hands. 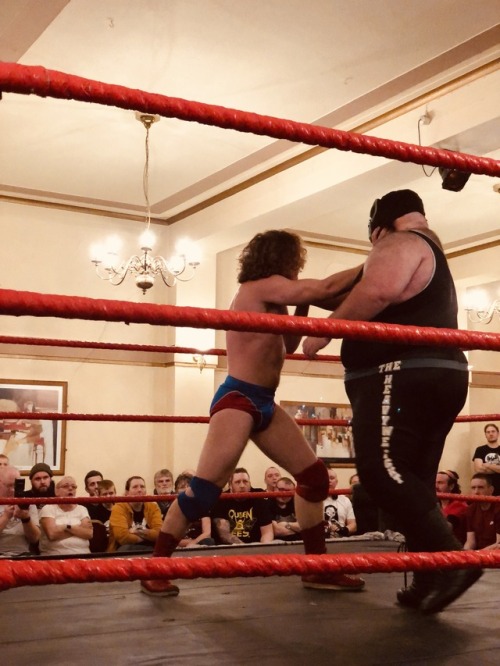 Next up was supposed to be a 8-man tag match but after Ethan Allen and Luke Jacobs, the Young Guns were already out. Chris Egan and Delicious Danny Hope were on when they were viciously attacked by Tag champs, Chris Ridgeway and Tyson T-Bone, taking them out of the match.

To even the sides, we were given a normal Tag encounter, with the Young Guns facing Rizzy Khan and Alex Boylin.

In a very good match, we got to see what both teams could do. Some proper heel work from Khan and Boylin, working on Allen took up the middle part of the exchange, then once we got the hot tag to Jacobs everything played out at an extreme pace.

Riz tried to disrupt Ethan on the top rope, but the youngster kicked him to the floor before delivering a drop kick as Jacobs added the sidewalk slam for the win.

Brilliant contest. If you’ve not seen the Young Guns, you need to watch FutureShock On Demand. I’d recommend this or the match with the Sexy Gents at Tapped 1.

Deadly Damon Leigh may have dreamed a thousand dreams, but it may not have featured taking on David Starr wearing a chicken suit, but that’s what we got.

This was the perfect pairing for a Legacy Tournament match and they didn’t disappoint. After plenty of chicken chants and Starr recreating the scene from a Chicken Tonight ad, we got a match and a beauty it was too. After both men had their moments and the American light up

Leigh’s chest like an early Christmas tree, Starr hit the cherry drop DDT and a Stan Hansen clothesline before making DDL tap out to a cross-face chicken wing submission. Which beautifully means he will be back in FutureShock in December.

During the interval, my wife Catrin, who is now becoming a regular at FutureShock, bought her first wrestling t-shirt. Not bad for someone who about 12 months ago told me she hated wrestling. The power of #BritWres.

Big Joe, escorted by the Nordic Accountant, Thomas Wolfe, came out to challenge the roster to his ‘Little Man Challenge’ but this time he would bite off more than his tiny mouth could chew.

FS Adrenaline Champions Joey Hayes answered the call and put his belt on the line against the henchest man in Stockport.

Tiny Joe held his own for the first half, but then when Hayes was looking to get advantage, Wolfe distracted the champ. However, the second time he tried this, his badly ironed shirts were knocked off the apron and Joey hit a cutter on the challenger to pick up the 1, 2, 3.

Joe is easily one the best characters on the circuit. Fantastic interaction, a sound technical wrestler. He knows what he is, and how to get the best out of his character.Women’s tag match was out penultimate contest of the evening. The Queen Bees, with Molly Spartan and Kasey Owens taking on Holly and Lana Austin.

After Jayla Dark was dumped for her untimely interventions it was interesting when Owens was knocked off the apron by her own parter. Austin then landed a hurricanrana on Spartan, followed by a snap DDT to pick up the victory.

It was nice to see some spots for Holly in this match. She is slowly getting more opportunities to put in the work and she’s doing a good job.

The only issue FS has is giving Molly a title challenger. Lana is the only obvious person, but we’ve had this since early in the year.

In what was a stellar undercard, the main event was always going to be the icing on the cake.

A huge long build for over a year would see Sam Bailey and Soner Dorsun go toe-to-toe. One match to end it all and the only way you win is to make your opponent say ‘I Quit’

This had everything: chairs, crutches, Durson hitting the roof, Bailey going off a wall and a fire extinguisher.

Bailey’s goons, Riz and Boylin came out to take advantage of the No DQ rules, but eventually they were chased out of town by the Young Guns

The crowd winced in unison when Bailey slammed the Turkish Wolf straight into the top of two stood-up chairs. Not the flat part of sit on, but the top part where you rest your back. Ridiculous.

Bailey, to the gasps of the Stockport crowd then poured LEGO across the canvas. YOU SICK FUCK! After trying to slam Durson, BMB was power bombed onto the popular Danish toy, much to the delight of the crowd. 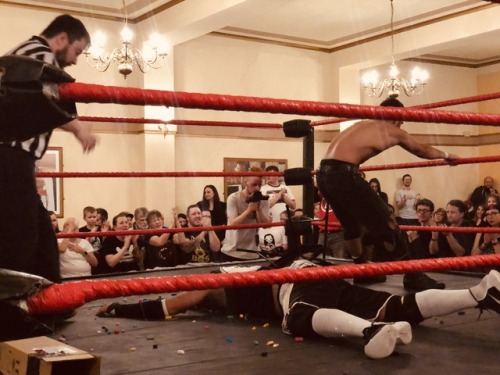 Both men went to war and this was a battle which will live long in the memory, but it was the high-flyer who got the win.

Bailey had taken Durson out in the past, leaving the injured wolf to hobble around with crutches, so only fitting he used the metal pole to choke his opponent, wrenching back on his throat, forcing Bailey to utter those immortal words.

In a great show of respect, both men bumped fists and the war is over.

Excellent card from start to finish. The crowd was in superb form too, well everyone expect Charlie Crothers. 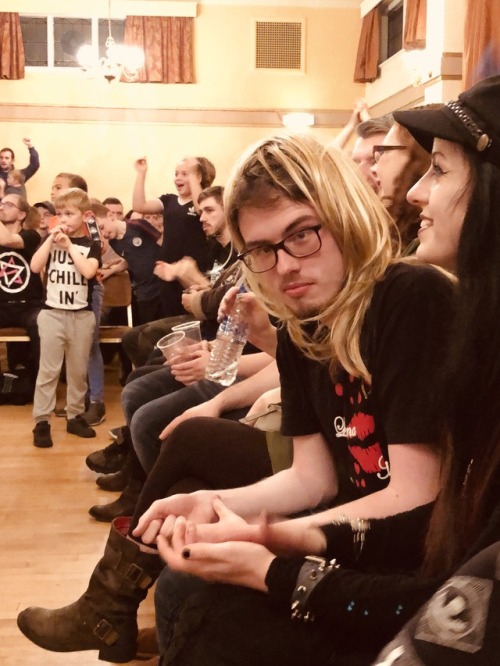 One of the FutureShock faithful who was raising money for The Christie by sitting in silence. Something very difficult for someone who is normally so vocal. He was also, due to his ongoing feud with Lana Austin, wearing her t-shirt and a blonde wig. Read more about his efforts on Facebook and help out if you can.