Whilst our Andy was winging his way down to Camden for PROGRESS Wrestling, my wallet was on fumes whilst waiting for payday.

Especially after the utter frustration of watching my usual Saturday footy acca go from £113 cashout down to zilch as Newport County go on the shitlist.

So craving some graps I decided to make the short journey to Salford and to the more local climbs of Wrestlepro.

Of course being a light ale enthusiast I decide to partake in some on the journey down and the pubs I visited are as follows. 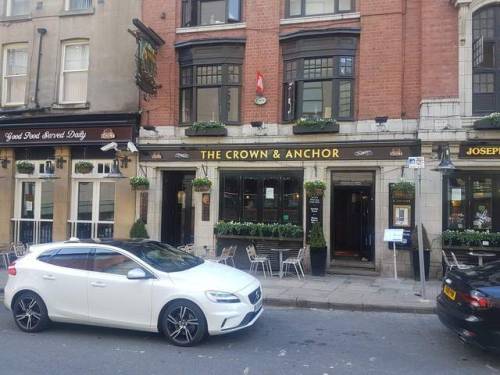 1st up was the Crown and Anchor located in Manchester centre which looks like its had a makeover since I last visited.

After ordering a pint of Bootleg I.p.a I decided to stick a cheeky pound in the fruit machine and low and behold someone had won £20,but didn’t take the repeat option. I duly did and gained £19 for my trouble.Happy days.

Next pub was the Black Lion located on the border of Manchester and Salford. I had a pint of J.W Lees Manchester craft lager which was o.k. 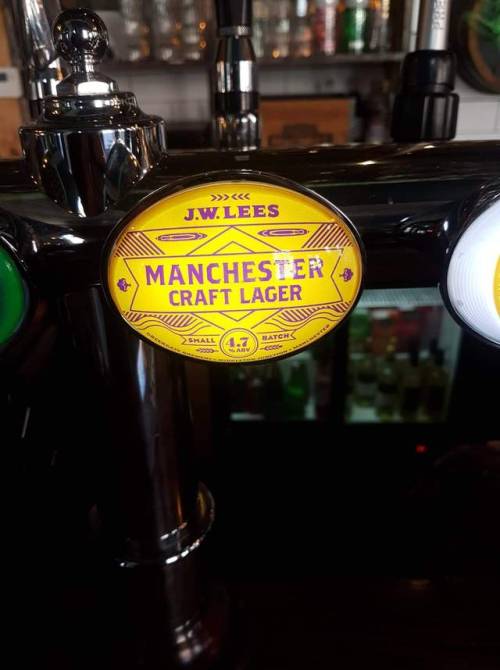 On leaving I was greeted by the famous Manchester weather… you guessed it right it pissed down! 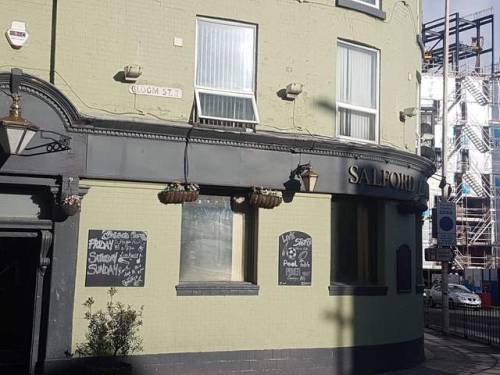 3rd and final pub was the Salford Arms where I had the beer of the day which was a ruby scotch ale – Beautiful stuff! Drinks done it was off to the venue so lets see what went down.

On entering the venue and taking my seat I spyed the commentary team of  wrestling friend Tom Slade and a man at first glance who looked like a young Brian Blessed.

They definitely wouldnt need the microphones thats for sure!

1st match up was a triple threat between Ethan Allen, newcomer Jack Fury and Graps and Claps favorite Big Joe.

Joe proceeded to get all the usual chants directed at him “how far away is he?” etc.

This led to Joe shouting at 1 fan that he needed new glasses to which I replied “ Its not glasses he needs its binoculars!”.

Some highlights include some great chain wrestling from Ethan Allen, Joe doing pushups instead of going for the pin and a cracking uppercut to Fury by Allen.

The end came when Big Joe took the win with a bombs away on Fury for the three.A good showing by all three combatants.

Next up was a tag match featuring members of Isiah Quinns the following, Nick Maguire and Alex Boylin versus the Baron bros Tom and Jack.

This match featured many cracking double team manoeuvres until mis-communication between Boylin and Maguire led to a hot tag for the Boylins.

Dissention in the Followings ranks led to a win for the Barons by using a spike backdrop driver for the 1 2 3.

After the match Isiah Quinn is back out to remonstrate with his losing teammates so this could sow the seeds of a break up further down the line.

Next match up is Stoxx versus one of Futureshocks most promising young lions in the form of Luke Jacobs. 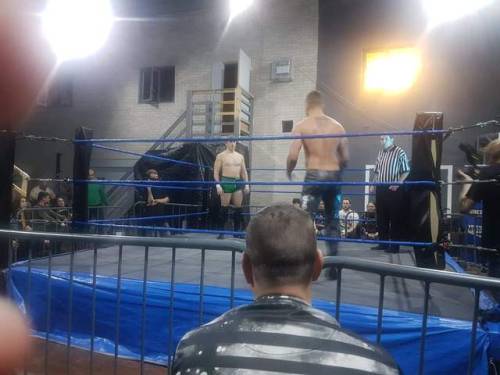 Shoulder barges are the order of the day, but Jacobs takes over with some lethal kicks which continues with Stoxx tied up in the metal barrier on the ringside.

Back in the ring the towellingof Stoxx continues before getting into a chopfest with both men laying it in. Stoxx managed to get the upperhand and hits a top rope splash for a 2 and with momentum on his side wins with a victory roll.

A hardhitting match from both guys who Id love to see go at it again.

Your half time main event is the womens title match between champion Alexis Falcon and challenger Jennie B.

Jennie B and Alexis offence consisted of screaming at each other very loudly. Falcon took charge by launching a kick into the splits onto Jennie.

Jennie got back into the match,but missed a splash which to a two count for Alexis. A ref bump occured which led to Jennie hitting her patented ginger snap and a cover,but to no avail because of course the ref was counting tweety birds.

Whilst Jennie was trying to bring the ref around Alexis hit her with a belt shot and pinned Jennie to retain her title.

Starting off our second half was a celebration by Wrestlepros new tag team champs Buzzkill and Wasp… The Swarm. 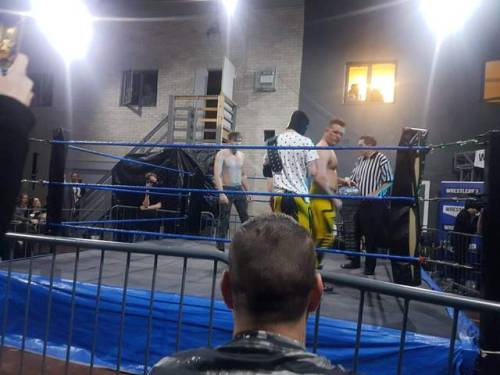 The champs offered up an open challenge which was duly taken up by a new team Thrift Avenue who looked like some dandy gents with some cracking pantaloons.

The end comes when Wasp hits an assisted splash for the three and take the titles back to their hive.

Next match is the returning Isiah Quinn versus “starkiller” Dave Birch. Its all Isiah at the start, but the tide turns when Dave hits a top rope spinning leg drop.

A good showing by Burch alas its Quinn who gets the win with an implant ddt. Quinn and his cronies carry on the beating until the Baron bros come back out to make the save and by the look of things a six man match is in the offing.

Main event time for the Wrestlepro heavyweight title and its a three way dance between Sam Bailey, Callum Corrie and champion Crater raaagggh!!!!! 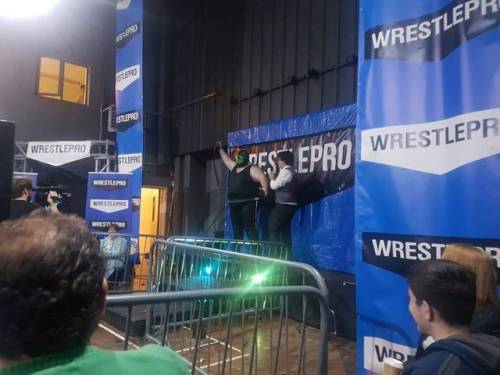 Early doors Corrie is thrown outside to the floor and Crater’s attention is taken to Bailey who trys beg him not to hurt him.

Of course this doesnt happen and Bailey is slung into the turnbuckle by Crater which literally moves the ring. 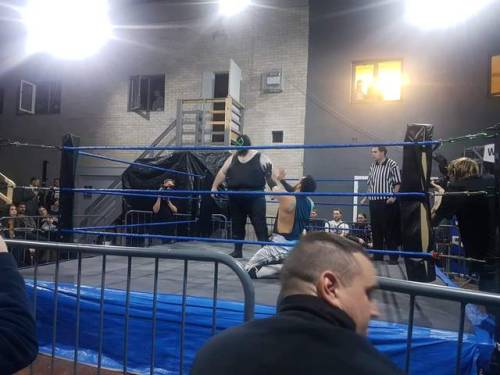 Corrie began to make a comeback with a springboard clothesline to Crater for a two. The finish came when Crater hit a massive big splash on Corrie to retain.

As Crater left to celebrate his title win Sam Bailey re-entered the ring to attack Corrie and he gets a superkick for his trouble to send the crowd home happy.

All in all a good show and a promotion that mixes trainees, up and comers and more established names to great effect and in saying that “love islands” Adam Maxted is on the next show on the 25th of November and is only £7.

Check out www.wrestlepro.co.uk for more info.

Thanks for reading and off to put my typing fingers in an ice bath!