Project Tokyo opens with Humito Kihara addressing the fans in English and Japanese, this crowd is probably 50/50 natives and foreigners flocking about Tokyo on Wrestle Kingdom week, Martin Zaki, FCP Owner comes to the ring accompanied by FCP Champion, Meiko Satomura. Zaki basically is thanking the fans for coming and runs through the card, with Kihara into Japanese for the native crowd. Meiko then addresses the crowd in her native Japanese, proudly displaying the FCP Championship on her shoulder.

FCP’s heel faction Schadenfreude make their way to the ring after Zaki and Satomura are done, with Brookes calling a big dickhead and claiming nobody came to see FCP but to see Schadenfreude. Brookes turns his attention to Satomura, calling her a part time loser before they attack Zaki and Satomura, Strong BJ and Akira Tozawa make the save!

First up is Moonlight Express, Mike Bailey and MAO, the DDT and K-Dojo Tag Team Champions, taking on The Hunter Brothers, the FCP Tag Team Champions in the opening contest. Starts slowly, Hunter Brothers isolate MAO early on, I apologise in advance as I forget which one is Jim and which one is Lee, but as usual they work well and efficiently together, back when I used to watch a bit more BritWres than I do now, I always thought they were undervalued and used outside of Fight Club Pro. MAO and Bailey come back into it, their too good not too have a say in the proceedings, tag champions at this point in two separate companies for a reason. Moonlight Express double Michinoku Driver gets them the win in a decent opening match.

Afterwards Moonlight Express suggest doing it again in England, to which the Hunter Brothers responded positively. Next up is DASH Chisako and Mille McKenzie challenging Beauty Bear, Chihiro Hashimoto and Mika Iwata for the Sendai Girls Tag Team titles. The crowd seems firmly behind Millie, with strikingly British accents… Millie and Iwata lock up and go through some chain. McKenzie looks to have gotten the better of Mika Iwata in this section of chain wrestling. They tag out, DASH and Chihiro quickly go at it, Hashimoto definitely has the power advantage but Chisako is so quick, Iwata is tagged back in and it looks like Beauty Bear will isolate Chisako, but this doesn’t work out as Chisako fires back against Iwata and tags McKenzie back in. Iwata has been isolated by McKenzie, who tags back in Chisako, Iwata and Chisako fire off some strikes before Chisako runs into a superkick. Iwata tags out and Hashimoto builds momentum but is stopped by a double team Superplex, Chisako then superplexes Millie onto Hashimoto, who bridges out of a pin at two. McKenzie takes out Hashimoto with a Spear but she kicks out at two, Millie goes for a German but its blocked, the challengers looking good. German Suplex, followed with a Lariat by Hashimoto who gets the win with a Bridging German Suplex.

Next up, Strong BJ versus Aussie Open, three big guys and Kyle Fletcher. I find heel Aussie Open a lot more enjoyable actually but I’m 100% behind Strong BJ. Fletcher starts against Sekimoto. I think Fletcher is trying to outpower Sekimoto, thats never going to happen. Okabayashi is tagged in, Fletcher decides to chop him and begs for mercy, to no avail. Fletcher, despite cowardly, wisely tags out. Davis and Okabayashi trade chops, Yuji definitely winning this battle, if anything Davis’ chops fire up Okabayashi! Fletcher sneaks in from behind, Davis with an eye poke and they all brawl outside the ring, Aussie Open get the upper hand here. Aussie Open isolate Okabayashi. Okabayashi does his best to come back only to get raked in the eye by Davis, gets some breathing space with a scoop slam and tags in a fired up Sekimoto, who holds onto a Boston Crab on Davis while Fletcher kicks him. Aussie Open then try to double team Sekimoto who gets the better of them with a double Lariat. Aussie Open keep at it and go to work on Sekimoto, Okabayashi in to break the pinfall. Aussie Open try to tandem Suplex Okabayashi but he suplexes them at the same time. Strong BJ with duelling Argentine Backbreakers for the submission win.

And now we get Strong Hearts versus Strong Hearts, as Lindaman and T-Hawk team up to face CIMA and Wrestle-1’s, Seiki Yoshioka. T-Hawk comes out with the W-1 Championship, which he won at the Wrestle-1 Korakuen show on the 4th, dethroning Ashino. Lindaman and Yoshioka to start, some very friendly feeling chain which dissolves into Yoshioka lighting up Lindaman’s chest with kicks. Yoshioka is currently competing in All Japan’s Junior Battle of Glory. CIMA and T-Hawk in, T-Hawk and Seiki Yoshioka square up and T-Hawk shows whose boss with some deadly chops to the chest of the cruiserweight. CIMA gets his knees up as Lindaman goes for a splash, himself and Yoshioka in control as CIMA locks in a submission. Lindaman comes back into it and tags out, T-Hawk takes care of the other two. This is really picking up, I would have expected them to go easy being stablemates but no, T-Hawk Superplex on Yoshioka, Frog Splash from Lindaman, Yoshioka kicks out at two. He tags out, CIMA swings momentum back for his side with some innovative offence. T-Hawk breaks a cover, Yoshioka breaks a cover. T-Hawk chops Yoshioka off the top turnbuckle but runs into a superkick from CIMA, CIMA fails to follow up, T-Hawk gets the win on CIMA in a great match.

Now we’ve Akira Tozawa, in his first match outside WWE since 2016, he teams with current FCP Champion, Meiko Satomura to take on CCK, Kid Lykos and Chris Brookes, sadly since I know this is the semi main, I’m eager for the Death House match which is usually killer back home, interesting to see what they’ll have here in Korakuen Hall. The rest of Schadenfreude that are in Japan, so basically just Fletcher and Davis, are out, making nuances of themselves. Tozawa gets an excellent reception from the Korakuen crowd. CCK use sneaky tactics to try get the upper hand to a hail of boos from the crowd, unfortunately they haven’t gained much traction as Satomura gets the better of Brookes. Schadenfreude go to leave the arena, Satomura and Tozawa go to chase them, CCK briefly get the better of the Japanese pair but get somewhat of a receipt. Aussie Open make their presence felt, Brookes with a thundering chop to Meiko Satomura, and he goes to work on her legs. This is now going all Schadenfreude’s way, much to the annoyance of the fans in attendance, this is becoming more like a handicap match as Aussie Open interfere almost as soon as the referees back is turned. Meiko is fighting off both members of CCK but Tozawa is not on the ropes, he’s crawling towards the ring as Davis picks him up and away from a desperate Meiko. Meiko rallies again, Tozawa cuts off Aussie Open and gets to the turnbuckle, Meiko makes the tag, Tozawa takes out CCK, classic hot tag stuff here. Tozawa, top rope, dropkick to Brookes, Lykos in but Tozawa is prepared. CCK coming back, showing some of their sick tag moves. Brookes throws Meiko out of the ring, Tozawa gets breathing space as he pushes Brookes into Lykos, tags in Meiko. Tozawa and Satomura on the ascendancy. Tozawa looks like he’s enjoying this. Pinfall on Lykos but Brookes pulls out the referee, Aussie Open enter the ring, Meiko tries to fight them off and succeeds. Brookes with a weapon shot, CCK go for the finish, Meiko kicks out at two. Tozawa comes to her aid, Spinning Heel Kick to Brookes, going for a top rope Brainbuster on Lykos, gets it. Brookes, schoolboy on Meiko, two. Scorpion Kick, three!

It’s Death House 3 time, fatal 4 way. Former KFC Champion and BJW Death Match Champion, Masashi Takeda is out first, followed by Drew Parker who impressed me in the last Death House match, Rickey Shane Page, a former King of the Death Matches and Tournament of Death winner and lastly another former Tournament of Death winner in Jimmy Havoc. Two sides of the ring of light tubes strung up between the ropes, as you’d see in Big Japan etc. Havoc getting his usual Jimmy, Jimmy Fucking Havoc chant from the Britons in the crowd. Drew Parker was nearly the first to eat some light tubes, before Takeda decides to bump on them before RSP and Parker follow suit. Havoc decides instead to use the light tubes on his opponents rather than himself, Havoc goes for a couple of chairs as he stalks and breaks a tube over Parker before gouging at his back. Takeda and RSP are on the outside with Takeda gouging at the forehead of Page with a broken tube. Parker with a dive to the outside taking out Page and Takeda. Parker takes a barbed wire board out from under the ring and places it on the floor. Parker and Page now the combatants in the ring, Page using his size advantage to hurl Parker across the ring. Takeda comes in and makes his presence felt, the immortal Death Match double champion will have his say in this match, snapping a tube in the mouth of Page. Havoc pours thumbtacks into the mouth of Takeda and slaps him. FREEDOMS Young Lions on the outside, well acquainted with clearing the debris. A staple gun is introduced, Parker’s head and Takeda’s tongue. Early Acid Rainmaker attempt countered by Page, who is bleeding fairly heavy from the head, nothing concerning yet a la John Wayne Murdoch in Carnage Cup a few years back. Page hurls his opponents into tubes. Havoc going for more Acid Rainmakers but fails, it’s a free for all, probably the quickest match of the night. Havoc finally hits an Acid Rainmaker on Parker but only gets a two count. RSP is now heavily bleeding but has a Chokebreaker for Havoc, swinging DDT and a 450 from Parker onto RSP, Takeda breaks the count, nearfall on Parker. Havoc and Page throw Takeda out the ring. A lighttube contraption has been introduced. RSP and Havoc work together to set it up. The cameraman just hit Page with a tube? Parker sets Jimmy up on the turnbuckle, attempting to Superplex him through some tubes. All 4 men are now fighting in and around the post, Takeda with a reverse DDT to Parker off the apron onto the barbed wire board. Havoc with a Canadian Destroyer off the turnbuckle through the tubes to Page to get the win. Havoc asks for this match in England with a Takeda, I think Takeda accepted.

I watched this on the new Fight Club Pro Unlimited subscription service on Vimeo. 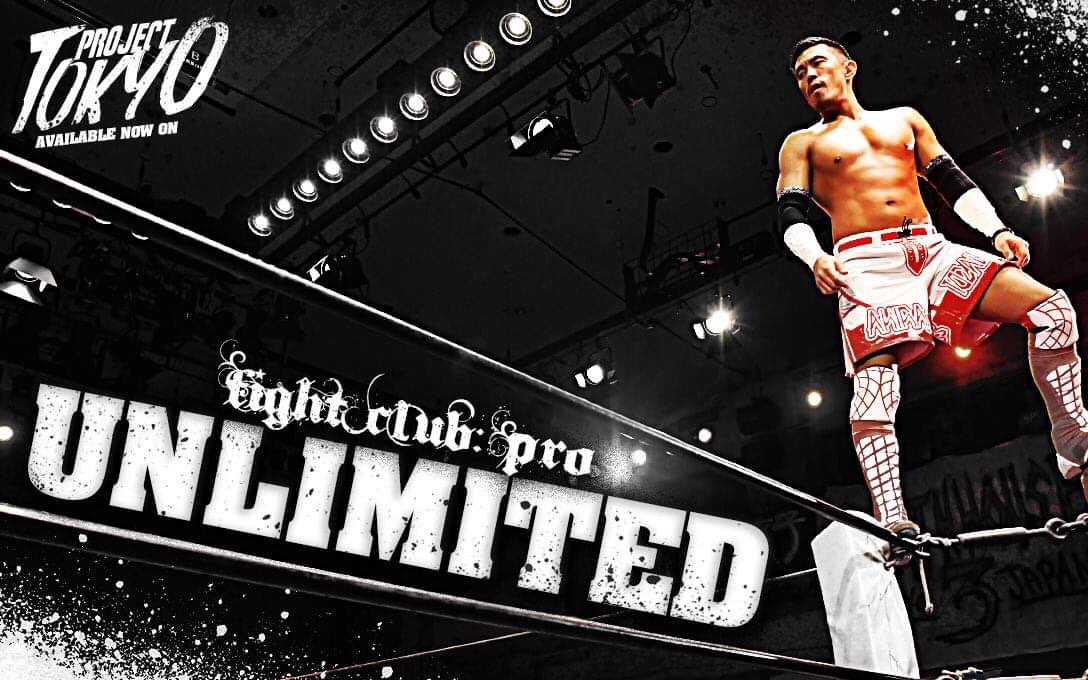 A very good debut show in Japan for Fight Club Pro, the womens match, Strong BJ and Death House being particular highlights for me!